How to use node data in content type as hierarchical select

I have a content type having the following fields 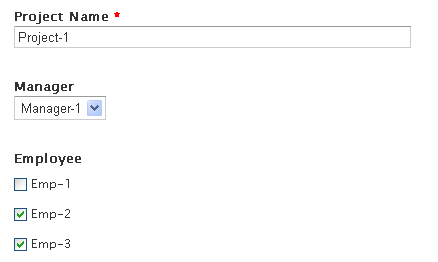 All Project names to be listed in select list(like node reference). If I choose Project-1 , the relative Manager Name (Manager-1) and Employees(Emp-2, Emp-3) should be loaded automatically(like hierarchical/chain select).

Is there contributed module available for this or I need to create a custom module for this?

It looks like you need Reference field option limit, or module with similar functionality:

This module allows reference fields of several types to have their widgets' available options limited by the values of other fields in the current entity.

This is best illustrated by examples:

Suppose you want news stories to be marked as being about a sport and a particular team for that sport, perhaps using taxonomy terms for both. To make editing easier, you would probably like want the 'team' dropdown to be limited to just teams for the current news story's sport.

To achieve this with this module, add the 'sport' field to both news story nodes and team taxonomy terms. Hence the team 'Chudley Cannons' would have as its sport taxonomy term 'Quidditch'. (This probably entails taxonomy term reference fields on terms themselves... which was bound to happen with FieldAPI sooner or later.)

If this module is not exactly what you want, it can be a good start for coding own functionality. At least it solves all AJAX interactions for you, so only part you might need to alter is the actual selection.

Not the answer you're looking for? Browse other questions tagged nodes taxonomy-terms or ask your own question.

0
Puilling Information From Referenced Entities to Display/Use In A Custom Content Type?
1
Calendar legend on taxonomy via relationship?
1
User or Content Type for employee directory
0
Hide CCK fields for users without references with node
0
hook_form_alter to limit user select list to those referenced in a node
2
Create relation between two select list for Hierarchical select option
1
Get access to node titles and nid's only
0
Filter Node Reference options
0
list on node page where node selected on different content types