Results from the 2022 Developer Survey are now available

EDIT: I've found out that this question doesn't make sense. The problem isn't that the hook is not called during the bulk_update. The problem is that the code generates unexpected aliases because of the "variable_set" request, which led me to think that the hook wasn't called. See my answer for the correct code to programmatically set alias patterns.

I have created a function to alter the alias for a particular content type when certain conditions are met, using the following code:

The problem is, when I create a node and save it, it works, but when i try to bulk update the aliases, it doesn't, and the default pattern set from the GUI is used instead.

Issue can be with the setting for Url aliases, when you run the bulk update. You need to keep it on the " Create a new alias. Delete the old alias. ". SO it will run update your old aliases. Please check if it works for you. 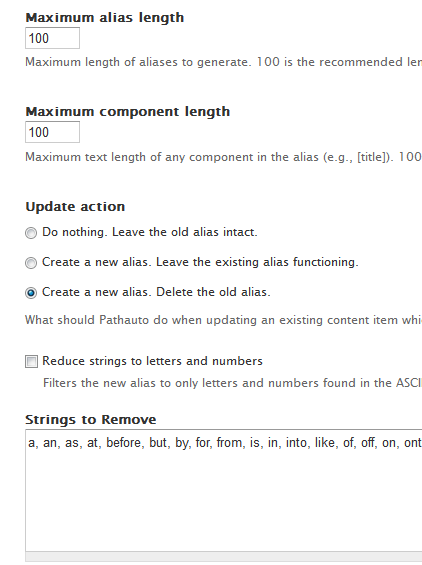 If you need to alter patterns like me, here's what Pathauto's writer said:

Setting variables in a hook like this is a bad idea, and not to mention, happens too late for it to actually affect the alias being generated. There is an actual hook for you to use instead, you should use that one instead of the alias alter hook.

As Sifro said use hook_pathauto_pattern_alter or there is an another way if you want to have custom data in url patterns. Create a token. For me the best way was to use Variables, make it as a token and i18n aware

Not the answer you're looking for? Browse other questions tagged hooks path-aliases or ask your own question.

0
How many times drupal calls hook_node_presave for a node?
0
Why does drupal_lookup_path() return NULL?
0
hook_path_update (and insert and delete) not getting called
2
How create Redirect pattern from old to new URLs?
3
How to use the language neutral url alias pattern in pathauto?
0
links__system doesn't use URL aliases?
2
How to create a hook for a module in a theme?
1
How do I modify the URL to a taxonomy term?