How to import/add translated strings having inline styles?

I've imported a .po file having Spanish translations. The import was successful but some translation strings were skipped because they contain disallowed HTML.

From UI, I found that some translations were not translated. So I tried them adding those via the translate admin interface (Administration » Configuration » Regional and language » Translate interface)

I could see the original text having inline style like following. 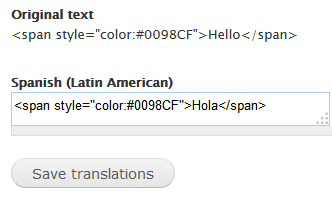 But when I tried to add a Spanish (Latin American) Translation and hit 'Save translations' getting the following error.

It's working when I remove inline style add translation like the following. So I guess it's not supporting inline styles and classes.

What could be the problem? I found a function in function locale_string_is_safe($string) under includes/locale.inc file. Do I need to do any tweaks with that?

Any suggestions would be much appreciated.

Yes your guess is correct,locale_string_is_safe "Check that a string is safe to be added or imported as a translation." if you want to ignore your job you should patch it for a while , change it to

after your job revert it.

Here's an alternative without hacking the core. You simply could unset the validation for the translation interface form:

Not the answer you're looking for? Browse other questions tagged 7 i18n-l10n or ask your own question.

11
Content for textgroup views is not allowed for translation because of its text format
0
Translating custom database table fields
1
Translate with t() function from spanish as source
1
Setting the default front page setting to be translatable
15
Multilingual content and single language admin interface
3
Why do some webforms have their elements value in translation UI (/admin/config/regional/translate)?
1
How can I allow HTML links in translated strings?