People who code: we want your input. Take the Survey

Not able to change the settings.php

I am working on drupal commons, and using pantheon servers for hosting. The major problem I am facing is the server database config issues. I am not able to change the settings.php file. Also Pantheon every now and then changes their db server password. How can I control this ? is there any server variable for the db instance, port, user id, password ?

Drupal removes "write" permission from settings.php, so to edit it, you need to give this permission back.

Use your cilent, and just tick appropriate checkbox. Like this: 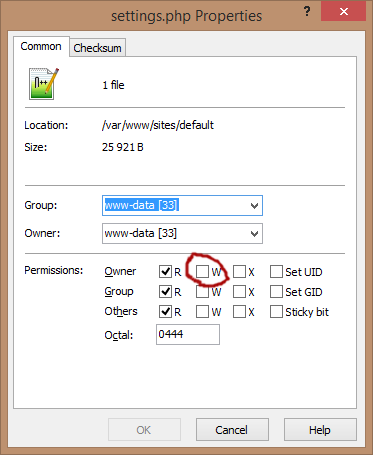 Pantheon does not require any settings.php to operate a Pressflow-based Drupal distribution because all database credentials are injected into server side variables and read by Pantheon Pressflow core. In fact, Pantheon ignores file-based permissions while Drupal checks these and may sometimes complain. If you are unable to alter a file in your code base, you should ensure your Connection Mode is toggled to "SFTP" instead of "Git" because you will not have SFTP write access while the code is controlled by Git version control. The toggle is available on the Pantheon Dashboard of the development environment of your site.

You should also be aware that Pantheon does not support the Drupal Commons distribution as it is not Pantheon Pressflow based and cannot read the environment variables we inject on the fly, such as database credentials. To accomplish what you're trying to do, you will need to merge the Commons code base with Pantheon Pressflow Drupal and receive core updates from the Pantheon upstream. Simply downloading a distro tarball from Drupal.org and installing it on pantheon will not work, and is absolutely not supported on the platform.

Running a Custom Upstream on Pantheon

Not the answer you're looking for? Browse other questions tagged 7 configuration or ask your own question.

2
Can I setup a backup migrate schedule from settings.php
4
How do I use Drush correctly to restore a site via the arr command?
2
Unable to login as user in my drupal 6.x website while able to access without login
6
Drupal reuses its hash salt
2
The connection to the server was reset after trying to log as admin to Drupal
1
Use different indexes for Solr searches on local dev environment
0
Drupal 7 returning empty array because of the database connection
2
Drupal 7 sessions wiped after changing settings.php