Using #states API with an image field as a control field

On a form, is it possible to use #states to hide/show a field based on whether or not an image field has been filled in?

More specifically, I'd like to get this node form: 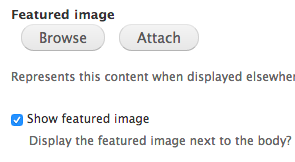 to only show the "Show featured image" checkbox if an image has been added. If it matters, I'm using the media browser widget for the image field.

I tried using #states, but it doesn't seem to work here. I had the following code in a hook_form_alter function, but adding an image didn't make field_image_show show up.

If it's not possible with #states, any idea how to handle it with custom JS? I tried the following JS, but it also didn't work.

You should be able to do it with #states just fine. Maybe double check your input name or try something a little different depending on what the html for that element looks like. This is the code I am using that works.

This causes it to only appear if there is no value for the input fid. Pertinent HTML:

may work just as well (untested)