It seems to me that my main Drupal UI based task to leverage my site's optimization is further optimizing it's CSS delivery...

Given the following facts, It's wired for me that Google's PSI advices me to do so:

Besides that, the site is very light in graphic details (both images and CSS).

I've tried to do the following AdvAgg conf's, but when I ran PSI again the advice still appeared:

It seem I don't have much options left... Would appreciate your help, Ben. 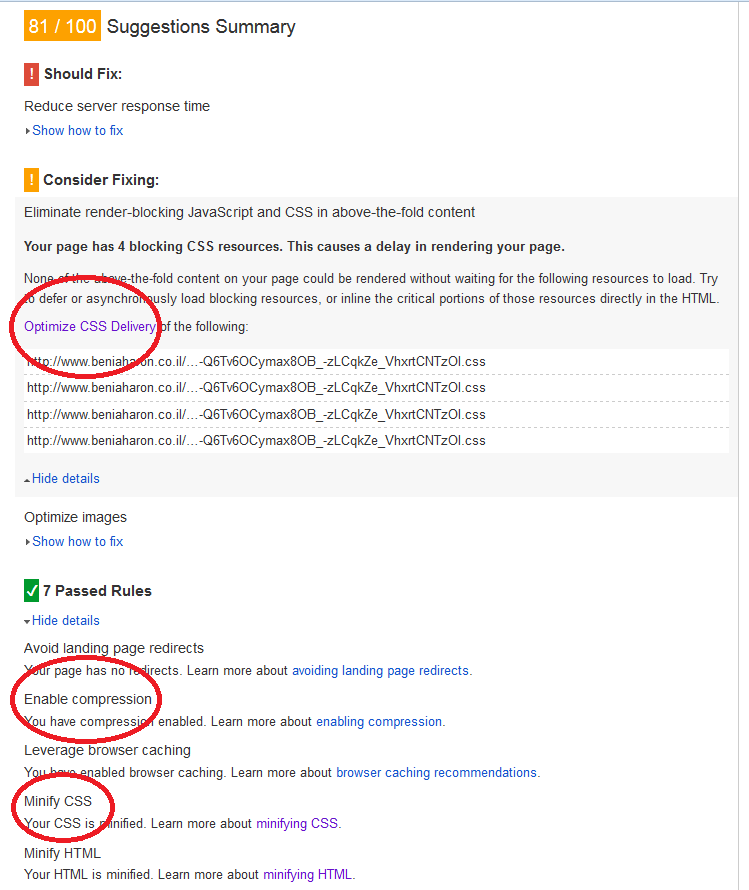 This is the issue you'll want to follow: https://www.drupal.org/node/2396609 Inline critical css.

You can get rid of this message by using "Deferred CSS Execution: Use JS to load CSS". It's under the Experimental Settings of the CSS section. When you enable this, the page will no longer wait for the CSS to download before it starts to render. The bad part is you'll get what's known as a flash of unstyled content (FOUC). The issue I linked to above has to do with inlining the CSS that's needed to display the above the fold content so the FOUC doesn't happen.

Another way to get rid of the message is to inline all the CSS. This can be done by going to the Inline CSS/JS on specific pages section; just use the CSS section. Pick the pages you want to be optimized; node/* works for all nodes as an example.

The bundler comes into play when you look at the connection view from http://www.webpagetest.org/. If you're opening a connection in order to download a single css and/or js file then you should lower the number of bundles and see if that prevents a new connection from being used; this is super helpful with HTTPS connections which take up a lot of time to open. If there are a lot of files being transferred (image heavy site) then using more bundles will help with getting a better cache hit ratio in the browser. I found that 4 for both works pretty well in most sites but going higher or lower really depends on the site. Higher is usually better if the visitor is going to hit multiple pages. It's sorta an art form in order to get it optimal. Here's the issue for Drupal.org in regards to using AdvAgg for front end optimization: https://www.drupal.org/node/2493801

1
Problem with enabling the Optimizing js files
0
Advagg and Nginx
1
CSS aggregates generating but not loading (core and AdvAgg), but JS aggregates load fine
0
Optimizing of DB resources
0
Tried to Inline CSS with AdvAgg but still get errors in Google
1
What does the AdvAgg bundler do?