Automatic tagging (based on other tags)

I have the following taxonomies:

When I create a new node Im allowing to enter "Cities" as a field of that node. Given that I have a "mapping" in place, how can I automatically assign the "Country" to that node as well (the user doesn`t have to do it, it happens in the background)?

Also, where would the mapping of "New York -> United States" be defined?

Thanks for your help!

Here is the module to do it:

I think it's preview image shows exactly what you want 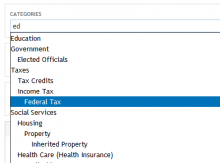 Not the answer you're looking for? Browse other questions tagged taxonomy-terms or ask your own question.

4
How to handle large taxonomy
2
Create Relation between two vocabulary terms in views expose filter
1
How can i filter taxonomy by another taxonomy term with views (term)?
2
Views: Can I create views based on taxonomies that link to other, context-specific taxonomy-based views?
1
different “no content” message based on taxonomy vocabulary/term
1
How to implement Node Access based on a Term in the user's profile?
2
How can I automatically assign users to a node based on a taxonomy?
0
How to make Dynamic Term Link based on content type?