How to show/hide a block at some content types using PHP filter?

I want to show/hide my block at some content types so I'm using PHP filter. My code in block configuration is:

It will show the block corectly only at /eshop page.

What is this, a GIANT Drupal bug?

There is another alternative available ... which doesn't require the PHP filter to be enabled (which you should try to avoid whenever possible) ... Just use the Rules block visibility module. Here is a quote from its project page:

The Rules block visibility module allows Rules components to be used to control block visibility. This provides Drupal administrators and developers extreme flexibility in controlling when blocks should be displayed on their websites, in addition to the default visibility options provided by Drupal.

The general idea is that if you can do it with Rules, you can use it to control block visibility, so the possibilities are limitless.

Need to show a block only for users registered more than a month ago?

Perhaps you have a block that must be shown only between 8am-5pm on weekdays?

What about displaying or hiding a block based on current weather conditions?

All of this can be done by using Rules block visibility.

With that, and as per the "if you can do it with Rules, you can use it to control block visibility" above, you've reduced your question to making Rules "check the path of the current page" (so that the block is only shown for the page with an URL like /eshop).

For an illustration of how to use this module, refer to my answer to "How to stop a Views block from displaying to admins, such as user/1?".

Use PHP Code to filter, the content type and specific pages. This code shall work on node pages, although you can use any code to filter accordingly.

Nope it is not a bug, if you are using arg() it will always consider the original path, that means node/[nid]

Why use PHP filter when you can configure your block using the UI. 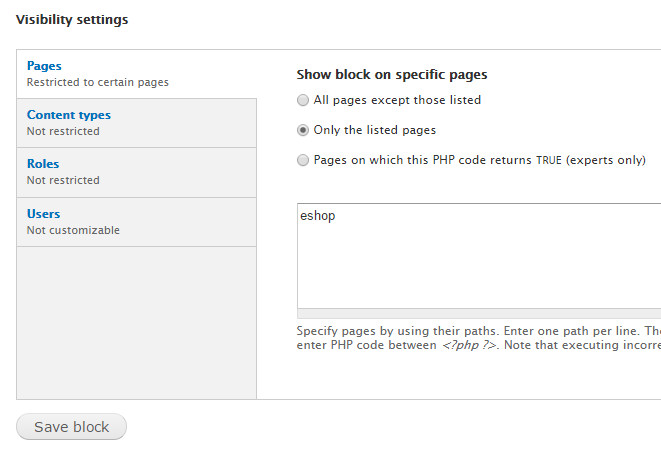 If you want to show your block to particular content type then you can set your Visibility settings by your content type .Please find the screenshot.

Not the answer you're looking for? Browse other questions tagged blocks or ask your own question.

5
How to stop a Views block from displaying to administrators, such as user/1?

1
How to make a custom block visible if and only if there are no other blocks active in given region
1
Controlling block page display options programatically
0
Show block in particular nodes having some string in title
1
How can I show a block on a specific page if a custom PHP function evaluates to be true?
1
How can I debug a Views 2 block argument set via “Provide default argument” and “PHP Code”?
3
Changing blocks based on visitor's country
0
Identifying drupal installation on windows
1
Please tell me what drupal table the block php visibilities settings is stored at
1
Can't set PHP block visibility programatically
0
Show block only on “Page Not Found”?