How to acces gmap markers after map is generated?

I've got a problem with Google map markers and I don't find a way to solve it.

I've got a map page view generated with the GMap module where I show certain nodes. I've got also a view block that show some of the same nodes that appear in the map in an unformatted list. What I need is to relate the nodes on the list with their respective markers in the map (so hovering the list change the marker icon or vice versa).

I could relate the nodes with the markers since I've got the exact coordinates of the node which coincide with the marker coordinates (obviously). My problem is that I don't know how to get a list of the existing markers on the map.

From what I've read I should push the markers in an array when they're generated so later I can acces to the markers using the elements in the array, but I couldn't found where does gmap generate the markers. I've tried creating a global array and pushing the markers in the gmap_marker.js inside:

but even I can see any result. I tried counting the markers that are generated with something like countmarkers += 1; but the output is also 0.

Anyone has a clue on hou could I achieve this? Any advice would be appreciated.

Edit: Ok, I solved this problem. It looks like what I did was fine and the problem was in the timing of the process. I called:

inside a setTimeout(function(){}); with a 10ms delay. By increasing the delay to 5000ms all the markers have enough time to be created and I can finally access the markers array.

Here is a quote from the Comparison of mapping modules:

GMap is considered a legacy module.

So maybe you want to have a look at the IP Geolocation Views & Maps module. Partial quote from its project page:

Despite what the name may suggest, IP Geolocation Views & Maps (IPGV&M) is first and foremost a mapping engine.

The module makes it very easy to create Views-based mapping solutions using the map renderer of your choice (Google, OpenLayers or Leaflet) with any location storage module of your choice, e.g.: 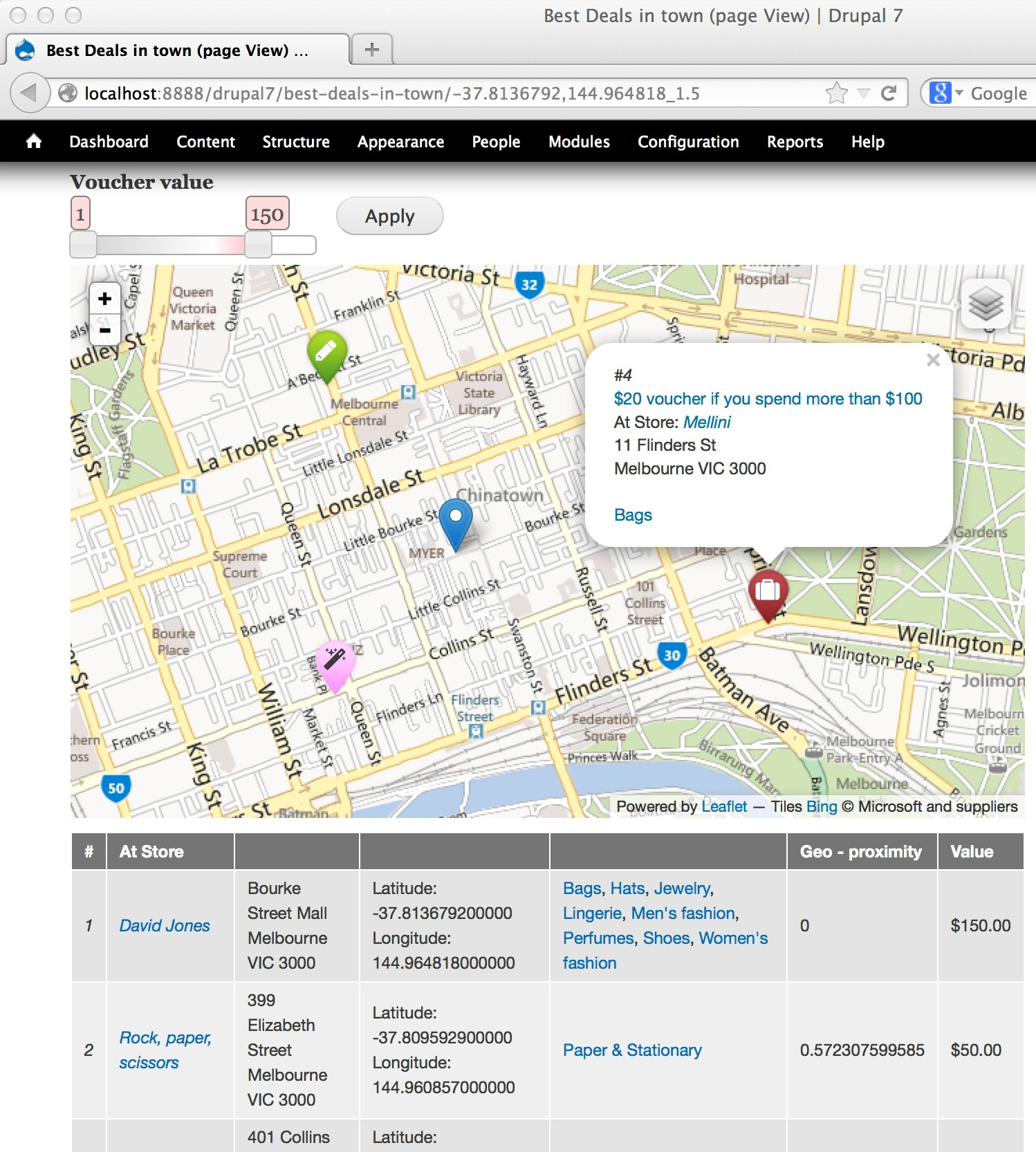 This allows you to bring together modules and feature sets that without IPGV&M you would not be able to combine.

Like beautiful animated marker clustering on Google or Bing or Mapbox ... any of various map providers.

These include marker differentiation based on field values or ranges (2nd screenshot) with or without font icons, various centering options, super-imposing the current visitor's location, allowing multiple content types to be displayed on the same map, full screen button and mini-map inset (bottom screenshot), polygon support (Geofield), marker tags and tool tips and cross-highlighting of associated content on the page when markers are hovered (and vice versa). 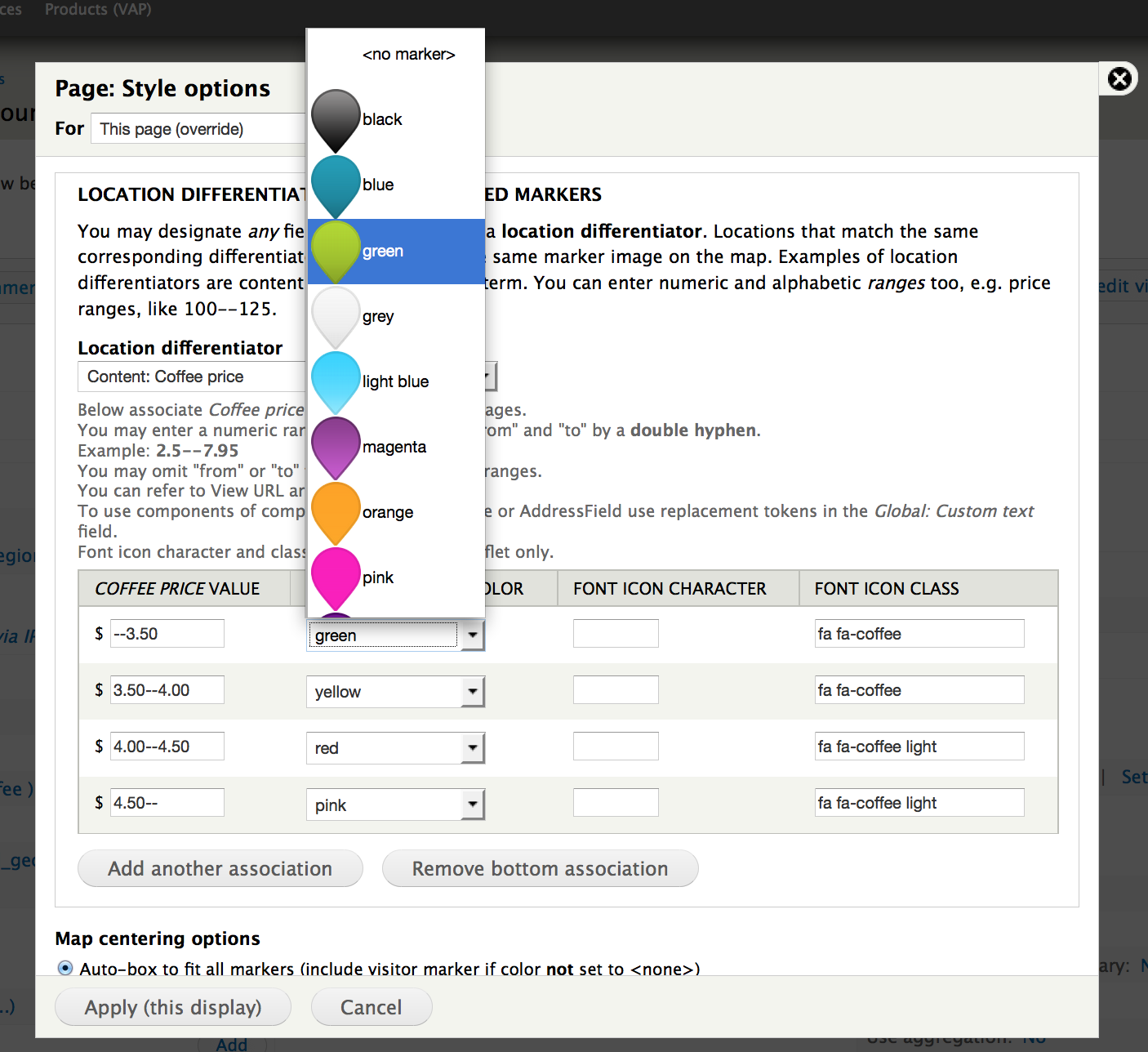 Head over to its (impressive) project page for even more information about it (it would be way too long to include a quote of it all here). That project page also includes various screenshots.

Not the answer you're looking for? Browse other questions tagged 7 javascript google-maps or ask your own question.

2
How do I get Location / GMap / Views setup to display non-US map nodes?
0
How/where is the marker layer added to the Google Map with the Gmap Module?
1
Gmap click marker should zoom the map and display other markers
0
Establish relation between node and gmap marker
0
GMap Module, How do I make my map change its marker icons faster/without hang?
0
How can I get a GMap Marker field to be a target in my Feeds importer?
1
Geofield Map - Filter attachment result by clicking marker