Render the User creation form on another page

I have a Views page and I want to insert the user creation form as found in /admin/people/create into the Views page header. I know people frown upon the PHP filter, but I just need to output the user registration form, which is at most 2 lines of php code vs having to make a module just for that. Unless there is a better way?

I know drupal_get_form() has been replaced from the form builder in Drupal 8, and the Drupal 8 equivalent of drupal_get_form() is, for example, $form = \Drupal::formBuilder()->getForm(Drupal\user\Form\UserLoginForm::class);.

But how do I get the form name or ID? How do I put it in that example? Do I just inspect the form and grab the form ID?

I tried the following code, but I nothing gets returned. What could I be missing?

Its a bit more complicated than render a login form... Here is the correct way to do this:

You could use the Form Block module and place it before/above your view.

Enables the presentation of user registration, site wide contact, or node creation forms in blocks. This is particularly useful for including forms on panels.

Do I just inspect element the form and grab the form id again and replace it with the UserLoginForm section?

I see now that you're talking about the admin form, I believe you just have to modify the formblock.module file and comment out or remove this part

I still would like to know how to do it in PHP, but no one has a clear answer on how to render a drupal form in D8.

Instead of code, I just used this module that exposes form blocks in the blocks page: https://www.drupal.org/project/entityform_block 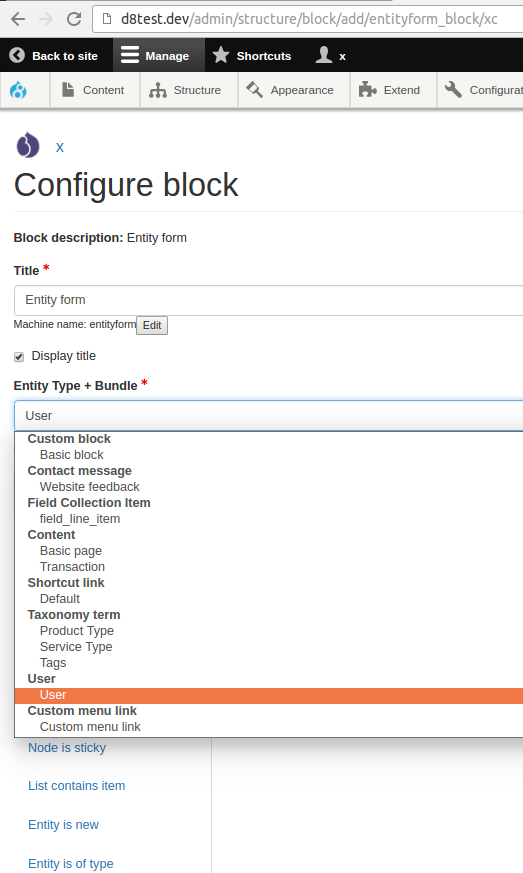 You are referring the wrong form class.

What you are looking for is the class for the registration form (i.e. \Drupal\user\RegisterForm). The annotation for the User entity class tells you which class handles that form.

I had the same issue with this. There are two ways you can do this, but the first way doesn't send any notification emails; it simply registers the user. The second way registers users as normal. Choose the one you need based on your situation. Note that there's different syntax in both examples for doing the same things. Ideally you'd use dependency injection too, rather than loading services directly from the container.

Not the answer you're looking for? Browse other questions tagged forms 8 or ask your own question.

1
Problems rendering drupal 7 user registration form with ajax in BootStrap 3 Modal
2
How do you render a set of checkboxes without using drupal_get_form()?
1
Render a content type bundle in a custom module template
3
How to combine several form objects into one?
0
Why doesn't loading a form in the view header work?
2
User->id() or Node->id() do not give back an integer but a string?
1
Programmatically load 'add content' form for custom content type in form or block plugin
1
Form in a block with results is the same block
3
Multiple modules extending form in OOP way, with no hook_form_alter()
4
Override user registration form