I have two content types: Ingredient and Recipe Sheets.

Both Ingredient and Recipe Sheet have a term refence field called Allergens.

While in Recipe Sheets Allergens is empty.

Ingredient has an Entity Reference to Recipe Sheets.

Now, I want when Ingredient content type is viewed, to automtiacally copy all the terms from allergens and put them into the Allergens of the Recipe Sheet that is entity referenced (the entity reference field can only have 1 value).

In my rule, when Ingredient is viewed, I use Action of loop then item list to get all the Allergen field terms from A (Ingredient). Then another action to run my component and I pass that list to my component.

Here is my component ("B" refers to "Recipe Sheet"): 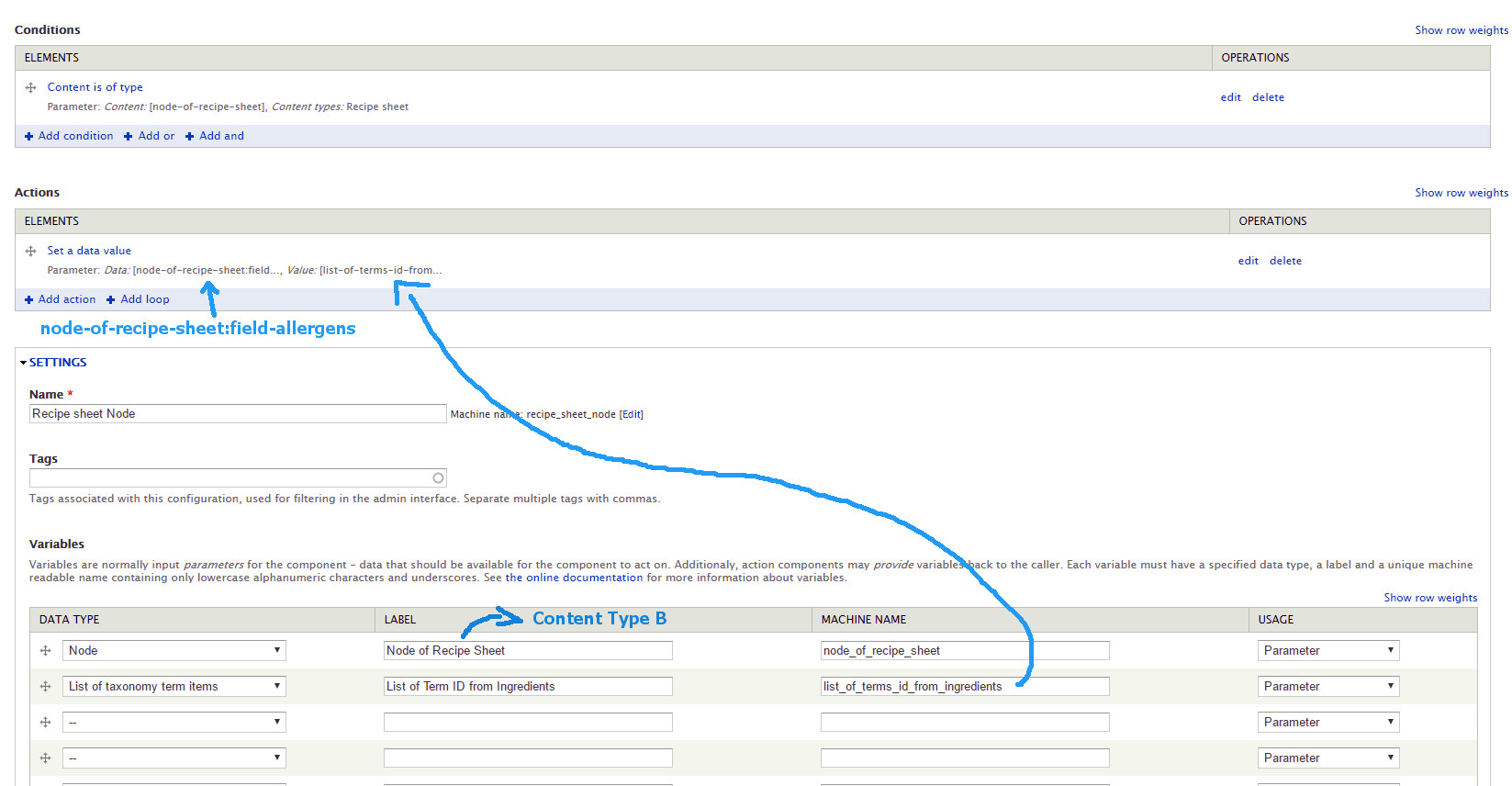 When I do this action, for Allergens, only the last tax term gets checked in B.

How do I get it, so it checks all the terms from the list and not just the last one?

Your action Set a data value can only set 1 value, which explains what you currently experience, i.e the last one.

Try to replace that action with an action "Add an item to a list". When doing so, you probably also want to set "ENFORCE UNIQUENESS" to true, so that you "only add the item to the list if it is not yet contained". Even though for your case it may not make a difference, IMO that is a kind of safety-belt when using this action.

However, you also have to add a prior action like "Fetch entity by ID", before this "Add an item to a list".

For more details, have a look at the tutorial "Lists and loops", starting from around 9:00.

Below are more detailed instructions, where appropriate with references to the equivalent that is shown in that video. And a corrected Rule and Rules Component (in Rules export format).

In the Rule that calls your Rules Component, apply these changes:

Here is an export of what I recommend as your (corrected) Rule:

In your Rules Component, apply these changes:

Here is an export of what I recommend as your (corrected) Rules Component:

Only believe what you've seen with your own eyes ... So use the Rules UI to import my corrected Rule and Rules Component. If you didn't do so yet, make sure you have a content type with the same machine name ingredients (doesn't matter what the content type of the entity referenced node is). And also make sure both content types have a term reference with machine name allergens. If the import fails, it must be because those machine names don't match, or the fields are missing (so fix that and retry the import).

After the import completed, and you have at least 1 node of each type (with an entity reference), it's Party Time ... Make sure your taxonomy terms include terms like salt, pepper, strawberries, bananas, whatever.

FYI: in my experimental setup, the combination of the above Rule and Rules Component seemed to work as requested in the question here ... one of my terms for testing was ... Champagne.

Not the answer you're looking for? Browse other questions tagged 7 rules or ask your own question.

6
How to mass update recurring date rules?
2
How to create a rule to combine the terms of 2 fields to create a new term and store it in a 3rd field?
3
How to unpublish a node and any related nodes?
3
How to set a new taxonomy term without overwriting an existing one when using Rules?
2
How to count the number of checked Checkboxes with Rules?
2
Rules Add an item to a List overwrites existing data
2
How to use Rules to set a value for a multi-value field?
1
Looping through taxonomy terms and adding them to term reference field with Rules
1
Rule fetches only single taxonomy term from multiselect values
1
How to set a term reference field value from a text field with Rules?
See more linked questions

4
In Rules, how can I use a set the value of a taxonomy term reference field to multiple values?
0
How to set a specific taxonomy with Rules during feeds import?
2
How to use Rules to set a value for a multi-value field?
0
"Fetch entity by property" for multi-value term reference field
1
How to use Rules to send an eMail containing a list of nodes with a selected value in a field?
1
Term page doesn't show nodes when terms are added in a field collection?
2
Accessing custom taxonomy term fields in a rules loop
1
How do I fill the authors name in a term reference field?
2
Setting data values in a paragraphs field with multiple values via rules?