Last call to make your voice heard! Our 2022 Developer Survey closes in less than a week. Take survey.

How do I resolve this conflict between two Feature modules?

I have two content types with various menus, views, menus, etc. which I have packaged as two Feature custom modules. The two content types both use a taxonomy and use several of the same fields in the database. When I load these Feature modules in a new site, they show conflicts with each other over these common fields and vocabulary and I am not certain what would be the best way to resolve the conflict.

Although the Feature modules are intended to work together, they do not need to both be present on the same site. Each may also work with other different features as well. They both use the taxonomy and fields for views filtering etc so it makes sense that they each include these components in their Feature definition. Should I:

I have not yet tested this, but will disabling or uninstalling one of the two Features modules remove the fields from the database even though the other module requires it?

Create a third Feature defining the components(*) used by the other two independent Features. 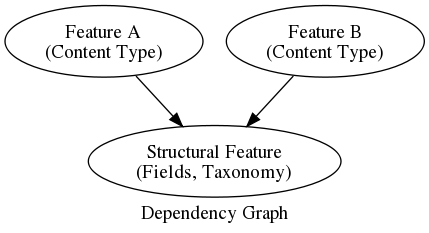 (*) In Features for Drupal 7, however, this functionality isn't yet committed — see http://drupal.org/node/1064472, and help review the proposed code there. — This patch has been committed to Features 7.x-2.x.

This solution on d.o worked great for me, far more robust to be exported to various sites than creating a third feature, which would create orphaned fields in another unrelated site.

One solution that worked for me was to attach the two Features into one bigger feature.This solved the conflicts.

Not the answer you're looking for? Browse other questions tagged features or ask your own question.

1
How do I resolve feature conflict for two different content types?

0
Missing Menu Links generating a Feature
2
How to update a feature
2
forcefully / manually remove content type
2
Is it possible to put existing/shared Content type fields as Feature code each in their own individual file to simplify/avoid git merge conflicts?
1
How does Strongarm decide which variables need to be included in a feature
0
How can I export the "Enable for OG Menus" content type option status in a feature?
0
features for same content type but different structure collide in multi site
1
Is there a downside of having too many features?