I successful used the data comparison on rules condition between saved and unchanged node for a date field.

I tried the same with a radio buttons list with two options, but the rule doesn't trigger if I change the value after saving the node.

Here the rule: http://kopy.io/6GfFi and here is an instream copy of it:

THE ANSWER IS: this is the way to put two condition in "OR" 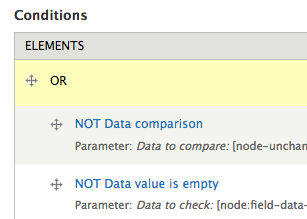 and NOT this one: 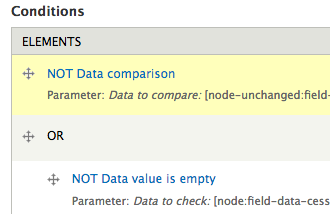 You clearly have a combination of Rules Conditions and/or Actions which don't seem to react as you expect/want them to do. If I was to get this to work, the first thing I'd do is Rules debugging. Rules is great, but sometimes also tough to debug if things don't work as you'd expect.

There are some typical facilities to do such debugging, but my Keep-It-Super-Simple technique I often use is my BINGO-trick (if you want, you could consider/call it "adding breakpoints to a rule you want to debug"). A sample of such rule can be found in my answer to "Which Rules condition can be used to email a user when an admin updates their profile?". Obviously, if you have more then 1 Rules Action (you seem to have (about) 4, following the "Display message test"), you may want to make it like Bingo1, Bingo2, Bingo3, etc. Depending on the order they are shown, you also know the order of execution. Stupid, but simple and efficient (I think). Here is an edited version of your rule containing those BingoX-messages (try to import it in your site, note I gave it another machine name):

I'd be interesting to hear which of those "BingoX" messages will get shown while debugging your rule ... Based on that you should come closer to finding the real reason for your rule which doesn't seem to do what you expect/want.

For more suggestions about Rules debugging, and more advanced facilities, refer to "How can I display the value of a variable inside a condition?"

Note: for those who think "this is not an answer", here is my reply to that already: do you know the story about giving somebody a fish, versus giving a fishline (or whatever that is called)?

2nd attempt (why no "entity has field"?)

About your "but the rule doesn't trigger". It may mean that you NOT (repeat: NOT) get that "test" message (as in your very first rules action). If that's the case, I'd wonder (if I was debugging) what results you get if you (temporary) remove the first rules condition? And what if you (temporary) remove the 2nd rules condition?

Not the answer you're looking for? Browse other questions tagged 7 rules or ask your own question.

2
How can I display the value of a variable inside a condition?
1
Which Rules condition can be used to email a user when an admin updates their profile?

2
Drupal 7, Rules, Convert text to date and set a date field
2
How to validate fields with the Rules module?
2
Rule to store user's last post date and scheduled rule based 30 day reminder
1
Using Drupal 7 Rules, how to react to a file upload and change a node field?
1
How to fix my Rules Actions to copy data from geofield to geofield?
1
How to set a Rules Condition "Does this node with date field use repeating functionality"?
4
Date field comparison in Rules
2
Setting data values in a paragraphs field with multiple values via rules?
0
Unpublish node based on date field with Rules
1
Why do both Text- and Data comparison seem to not work in my Rules conditions?