How to create modal windows (pop-ups)?

I am trying to use Drupal 8's core function to open a page in a modal window. Unfortunately it is very hard to find some official documentation about it, and most of the blogs covering this topic seem to be outdated. But as far as I know, it should be possible to create a modal dialog by adding the following attributes to an a-element:

Where in my case /impressum/lizenzen/43 is a path to a views page.

This seems to work, but only when I am logged in as admin. As this does not seem to be an permission problem, I assume it is related to the admin theme (Seven), that might include some core libraries that Bootstrap (the which I use for my site) might not. But oddly enough, in the title bar of the modal appeared, instead of the page title, the string ´Array´, what makes me assume, that an unexpected array to string conversation took place: 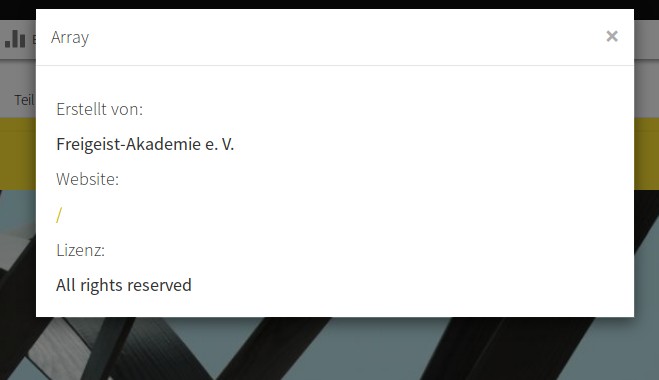 I struggled with the Documentation as well. However, I was able to get my Modal working using the Dialog API D8 Core provides.

This the official documentation for the API change you've mentioned:

Modal/dialog/ajax is using query parameters instead of accept headers

The most important detail is to attach this library:

You ask about why this works on admin pages without this. The reason is, admin pages already have dependencies on most Drupal jQuery libraries, while non admin pages are loaded without any jQuery out of the box (which is a great performance improvement in D8).

If enabled in the theme settings of the Bootstrap theme, "jQuery Modal" is replaced by "Bootstrap Modal", see this code snippet:

For this to work you attach the same core library as above, so that the Bootstrap theme can find these core libraries to override them.

For anyone trying to add this to a theme, you can simply add drupal.dialog.ajax to your libraries.yml file under JS dependancies :

Your theme needs to declare a dependency on core/drupal.ajax because ajax is not loaded automatically for anonymous users.

Not the answer you're looking for? Browse other questions tagged 8 javascript or ask your own question.

4
How to open a popup form from a view link?
2
Drupal 8.0.0 Open modal dialog
0
Replace the default modal with a different one

0
jQuery UI Dialog attempt to submit a form using AJAX redirects me to the actual form page instead of AJAX submitting
0
Long Ajax error using Date module Views and Fullcalendar
0
How to Implement Modal AJAX Form Pagination
1
"Place block" ajax error when using nginx
1
How to display a confirm box before submitting a form?
2
Add animation/fade to modal/dialogue box (without using the bootstrap)
0
Creating ajax modal from event
2
How to populate an Entity Reference field from a modal AjaxResponse?
0
How do I display a modal dialog on page load, with working title and dialog options, using OpenModalDialogCommand?