Why has my security shield for my new module on Drupal.org been removed?

I have recently managed to create a module on drupal.org, by following the entire process from Sandbox->Project Application->Module Publish.

However after few weeks my module lost the security shield, and am getting this message instead:

This project is not covered by the security advisory policy. It may have publicly disclosed vulnerabilities. Use at your own risk!

I have gone through some of the documentation (Security advisory process and permissions policy), but I couldn't find suitable explanation.

Here is a screenshot of how it looks like now: 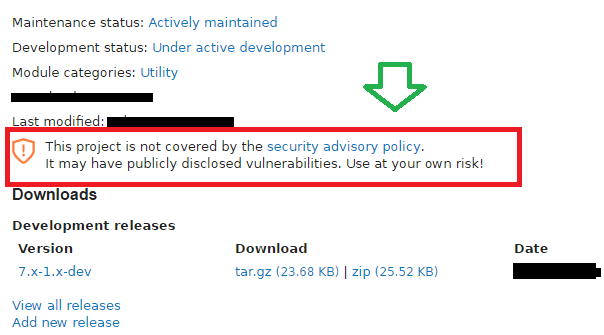 Only full releases get the security shield. Your screenshot only shows a dev version. I don't think the shield was removed from your module, as it wouldn't have had one in the first place since you don't have a full release.

To get the security shield, you'll need to release a full version (one not suffixed with -dev, -alpha or -beta).

Even having done so, my module still does not have the advisory shield, so I assume it now goes under some review from the security team before receiving it. This issue seems to support that assumption: https://www.drupal.org/node/2666584

It turns out their was a bug in the system. I am already able to promote modules to drupal.org rather than the sandbox. With existing modules, when upgrading from D7 -> D8, modules were automatically given the shield when I released a full version. However the module I mentioned above did not have a D7 version, and when I promoted it to a full release it didn't receive the shield. After waiting two weeks for approval I finally contacted the security team, and they looked into it and found a bug in the caching system, and fixed it.

So it appears that the original information I gave - that you just need to release a full version, and have opted into security advisory coverage, is correct.

Here's a screenshot of the module edit page. 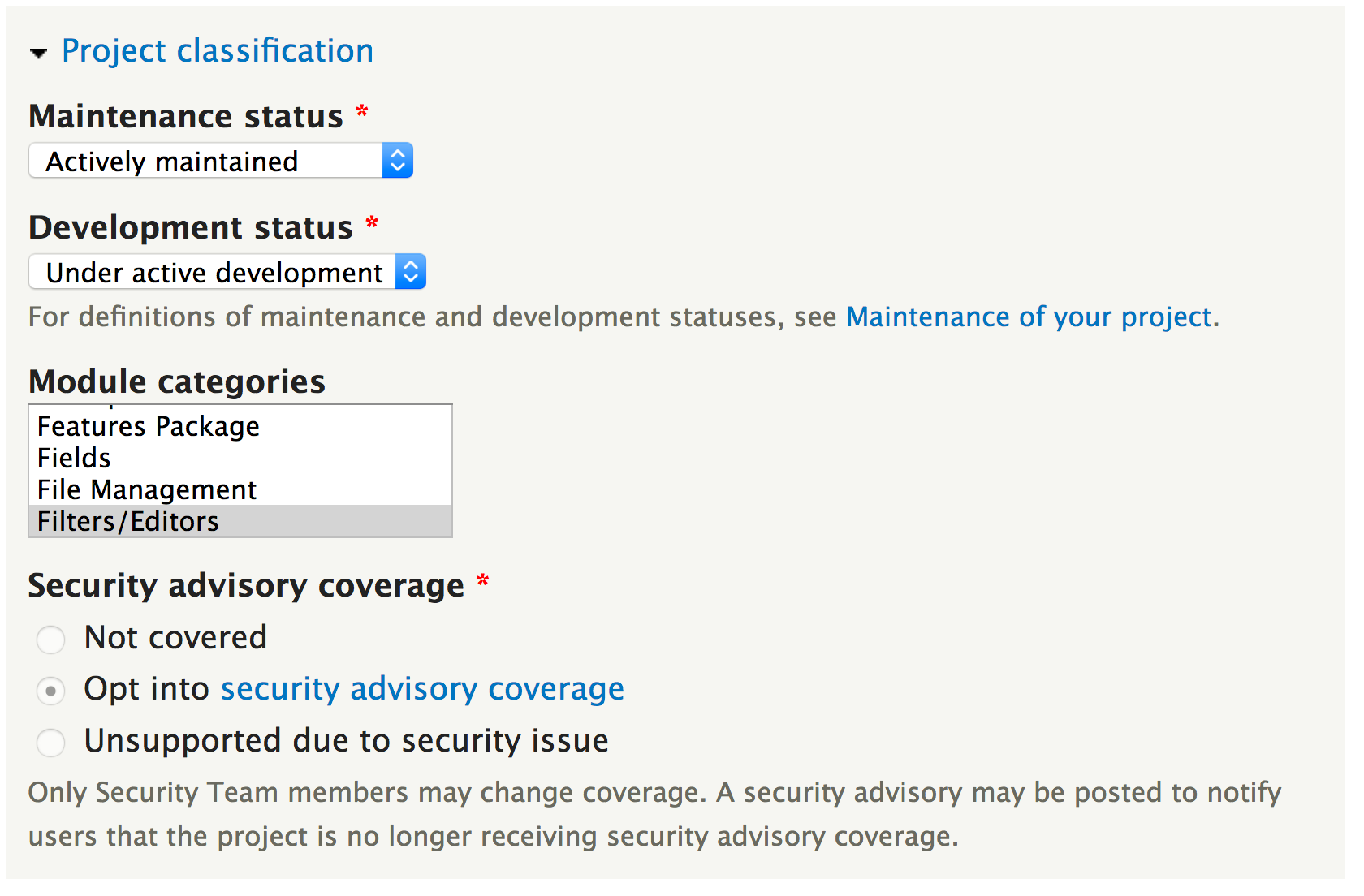 You need to create an official release, for at least 1 version of Drupal core that is supported. In your case, for D7, like a 7.x-1.0 version of your module. Shortly after doing so, your module will have the security shield.

If you want, have a look at modules such as the Conditional Rules module, used in over 11K Drupal 7 sites. It has the same message shown on its project page also.

For way more details on this, refer to these issues:

How to create an official release

Head over to your https://www.drupal.org/project/myproject/git-instructions (whereas you replace myproject with your module name). Near the bottom of it, you'll find detailed instructions about Creating Releases. More specifically you should do what's mentioned within Tag for a stable release there, which is like so:

Once you've pushed the properly formed tag or branch, see Creating a project release for directions to actually create the release node.

Not the answer you're looking for? Browse other questions tagged 7 security community-official-site or ask your own question.

2
What are the really use of the ancient Project Application issue queue now that you can promote your own sandbox projects?

8
What are methods for tracking discussions or issues on Drupal.org
3
Is there a Drupal.org issue queues module? Which module does Drupal.org use?
0
How to use security review module
1
Security issues after authenticated user has been logged out
1
Why can't I comment on a module' project page on drupal.org?
6
How to override “This image has been removed”?
0
Which Drupal versions are affected by the vulnerabilities in advisory PSA-2016-001?
2
What are the really use of the ancient Project Application issue queue now that you can promote your own sandbox projects?
0
A contributed module without an issue tracker on Drupal.org?
2
Session API Security Advisory