How do I find available public methods?

I'm finding that the biggest problem in working with Drupal 8 is I can't get the data I need. Drupal 8 wants me to use public methods rather than manually drilling down thru an object. The problem is, I can't figure out a consistent way for getting a list of available methods! (they magically exist, and I feel like I'm just supposed to know about them).=

For this example, let's say I have a content type with a video field. I need to get the raw URL of the video file in that field.

So I'd start with a node id ($nid), and somehow I have to figure out how to load the node. This isn't too bad because there's lots of examples. So I do something like $node = \Drupal\node\Entity\Node::load($nid);.

So far so good. Then I need to get the value of my video field (field_main_video). This took me FOREVER to figure out because there's conflicting documentation around the 'net. Finally I figured out I'd have to do something like this (because it is a multivalue item):

...then loop thru the array etc. Using kint didn't help me find this, either. Because, for example, if I kint($node) and look under methods, I don't see getValue() as an item there. Still not terrible, because there were enough examples around to figure it out.

As I go deeper, though, what I didn't know (this is the important part) was that rather than getting the video field entity id, then loading the entity, then finding the "uri" field in the entity, etc (like I would in D7): There was a method that lets me get the URI all in this same line of code!

But how could I possibly have known this getFileUri() existed? I happened to stumble upon it in a blog post. This truly DOES make getting a URI easier than in D7...but only if you know (magically) what methods exist for each 'level' of an object.

In the end, with this example I'm asking: How do you find all public methods for each level of an object in a way that's easy to read and understand? Note that it seems there should be a drupal-centric (ie. devel module) way of doing this rather than manually searching api.drupal.org or using something IDE specific?

Content entities are different from most other things in that they often do not have methods and proper interfaces, at least not for configurable fields.

In case of content entities and fields, public methods is not really what you actually want to know, what you want is to know about fields and properties. And only when you get to an entity again through a reference then the methods matter.

For an overview, I always refer to the great Entity API Cheat Sheet.

Content entities have a fixed structure, Entity > Field (FieldItemList) > FieldItem -> Property. A property is either scalar or a reference to something else, e.g. another entity, a language object, a date object, ...

For a few specified examples, some useful snippets:

Well, I found myself using quite often the combination of var_dump(get_class_methods($object)) to have a list of available methods for the given class.

I also look quite often into api.drupal.org for further details.

Not sure if that will completely answer your question but what helps me a lot is using the diagrams feature in PhpStorm.

For example showing the hierarchy 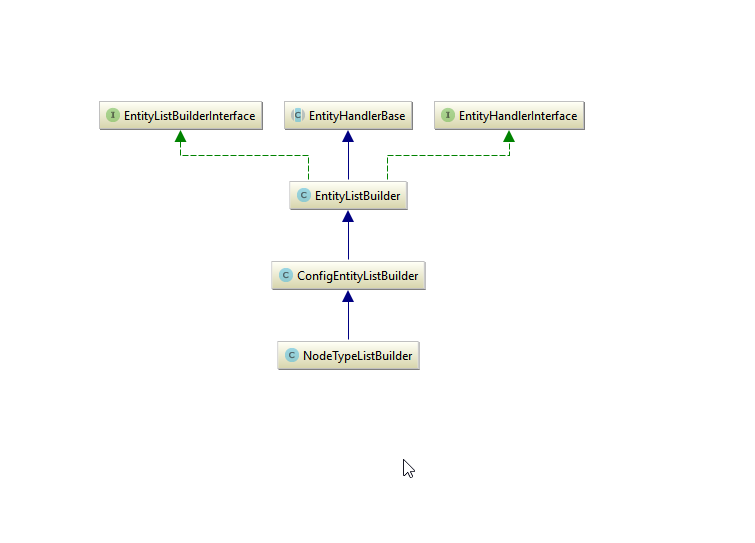 You have options to show also method names 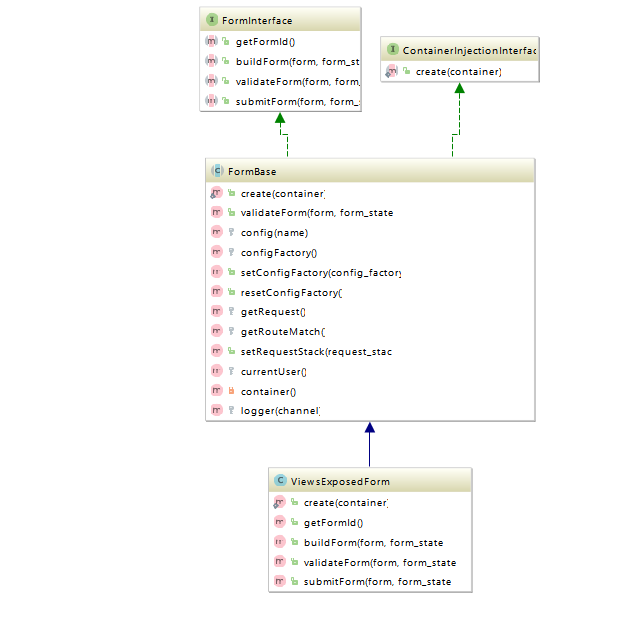 I hope this helps you in a way.

You can use the PHP get_class_methods function. The example below users a file upload:

First, let's look at the definition of the method: https://api.drupal.org/api/drupal/core%21modules%21file%21src%21Entity%21File.php/function/File%3A%3AgetFileUri/8.2.x

From here, we can see the class this is part of, and there is a link to it:

Clicking through takes us to: https://api.drupal.org/api/drupal/core%21modules%21file%21src%21Entity%21File.php/class/File/8.2.x

In your IDE, you could also search for the \Drupal\file\Entity\File class. One way to be sure this is the correct class is to look at the annotation:

Notice the id — it is file. Presumably, if debugging, you could look at the contents of field_main_video->entity and you would see this ID somewhere. Then you just search for it in your IDE. Usually, though, one knows enough about the entity types one is using to guess one's way to the right class (after which one could verify that the annotation contains the correct ID).

In this particular case, I also know that File is probably a class that extends ContentEntityBase, since it's more like database content (a content entity) than configuration (a configuration entity). So when I see my assumptions confirms, that helps me know I have found the right class.

So, in short: your IDE, strategic debug() statements, and some guesswork are the best ways to discover Drupal 8.

P.S. Change records can also be helpful. They are at https://www.drupal.org/list-changes/drupal

Not the answer you're looking for? Browse other questions tagged 8 entities or ask your own question.

0
How to get the node title of a refernced node
2
Determine available Entities entity_metadata_wrapper value() methods
2
Media module and views. Cannot make video image linked to node
7
Drupal 8 node serialization to JSON
3
How to create an 'Upload a file' field?
1
Why I cannot get translated entities
5
How do I create a Url object from the public file URI?