I have added user roles and permissions to feature which I use to featurize general site configurations and theme settings.

In the past I believe this worked just fine, however, with my latest push the remote created additional roles instead of changing the names as I had done on dev. I deleted the old roles and kept the ones with the proper names. MySQL drupal.role shows that the roles now have new IDs also which I believe could be the cause of the problem. I shouldn't have deleted the roles that matched dev but since I already did, where do I go from here? Should I manually change the ID's in MySQL?

I'm working on a new site that isn't launched yet but will be importing users from another site.

Here you can see the original role IDs and what is on dev: 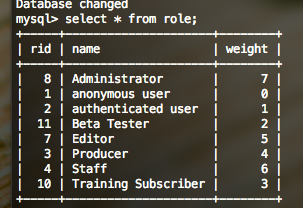 Here you can see the role ID's on prod now: 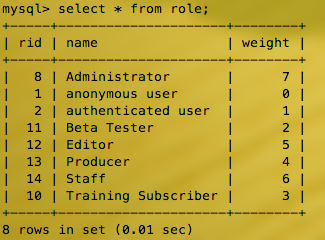 Since production hasn't yet been released and is still under development, I took a risk of mysqldump the drupal.role table and then importing them on prod, which fixed the issue.

LongBoardNode's suggestion of editing the RID on dev would have probably been a better idea,

Not the answer you're looking for? Browse other questions tagged 7 users features version-control or ask your own question.

2
Updating Drupal modules via git on remote server
1
Roles in Features: Are they always imported in alphabetical order?
1
Using drupal 7 block from another website luckily on same server
2
Why does my Quiz rule stop working after adding an extra user profile condition?
0
How to allow a role to add user without adding user name, password, roles, etc
3
Users can't log in sometimes
0
Migrate Quiz Results Data
2
Exported feature with roles not imported when loading module