How to send an email using Rules to everyone in an Organic Group based upon a date field?

I have an OG content type with a date field. When the date in the field comes up, I want to use Rules to send an email to everyone in the group using the other fields (title/body/og name) in the node.

(Edit) My OG is "Teams" and the OG Content node type is "Events" with the date field. So when field_date in Events is within 24 hours Rules will send out an email to all the OG Members of Teams.

I'm having a hard time wrapping my head around triggering the event based upon the date field and then send the node information to all the different users in the different groups.

To do what you're asking for, I would only use the Rules module, and the Rules Scheduler (a submodule of it), as further explained below.

Create a Rules Component which looks like so (in Rules export format):

Some details about the above Rules Component:

Step 2 - Create a Rules which schedules the Rules Component

Create a Rule which looks like so (in Rules export format):

Some details about the above Rule:

To be complete: the first Rules Action (to delete the previously scheduled task with the very same Task identifier), is to ensure that the Rules Component is only executed once. The typical scenario is that first the node gets created (and the Rules Component is scheduled accordingly). But later on the node is updated. In that case, the request to execute the previously scheduled Rules Component is deleted, and a new request is scheduled again. And if the date itself was not updated, it will be scheduled for execution at the very same moment. But if the date was updated also, only the date of the most recent update will be taken into account. For this mechanism to work, it's important to use a unique Task Identifier, to be used in both Rules Actions. That's why I added the token [node:nid] to it (with a prefix like Notify-OG-members-for-node- so that it can be recognized by somebody looking at the currently scheduled Rules Components also).

So the question that remains is: "How will the eMail content look like if you're processing a node for which an anonymous user has no access?". If you run in any such access issues, the easiest workaround I can think of is that you improve the Rules Component by adding additional variables (used as "Parameter"), and so that these variables contain the values of the relevant node's fields that you want to be able to refer to in the eMail to be created. Since the user who triggers the Rule from Step 2 (due to a create or update of a node) should have (read) access, for sure these values will be passed to the Rules Component at the time of scheduling the Rules Component.

PS: I'm assuming this question is about D7.

For this you should use VBO to provide a list of nodes to your rule. Here is an answer of mine that gives some detail for this.

When you get the list of nodes, you should be loop them, fetch the users for each, and send the email.

You should probably also add an email sent boolean field to the content type, set it to TRUE in the rule and then use that to filter out nodes in your view so emails don't get sent twice.

For this, you probably need to use the latest Dev release which fixes an issue with VBO not supplying data to Rules.

View 1: List of groups. You would add an extra filter here to get OG groups based on time. 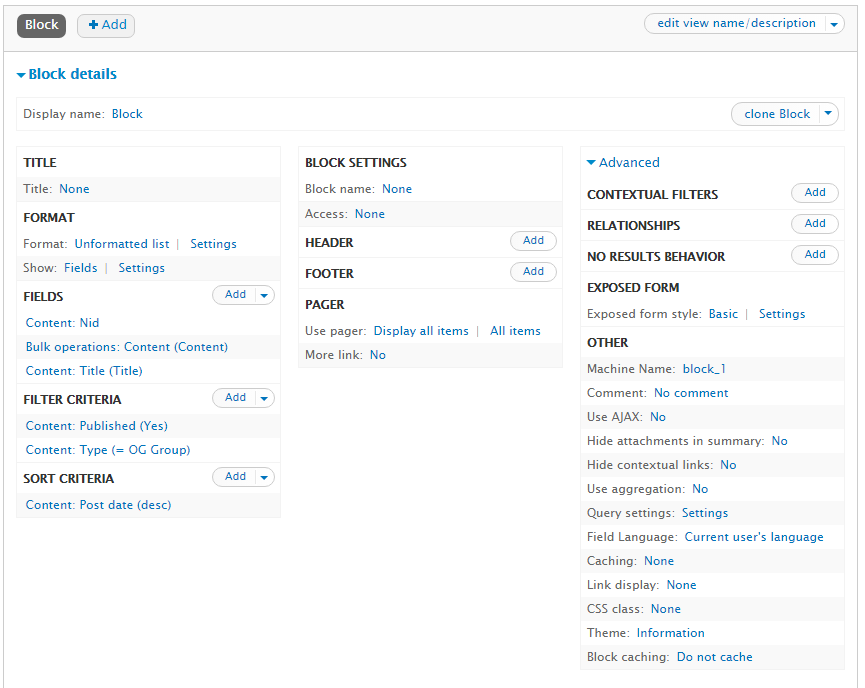 View 2: List of users of a group. Note the contextual filter and the second image showing its settings. 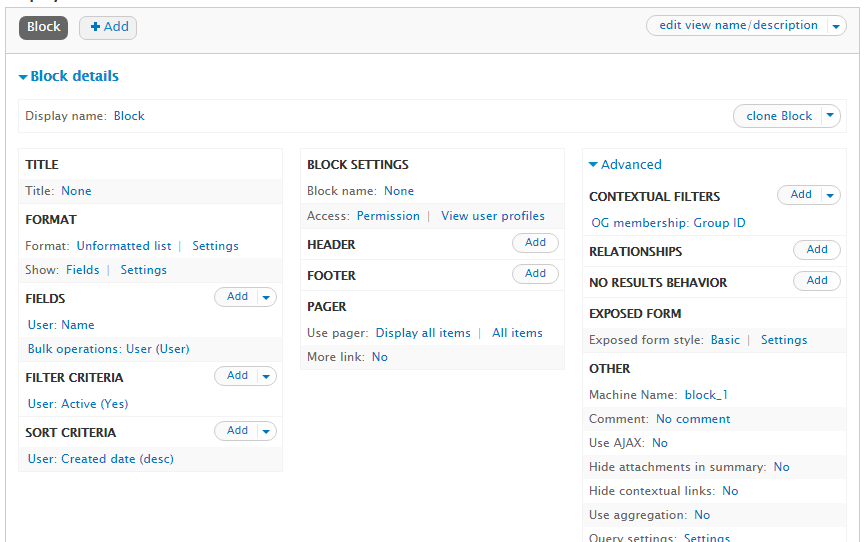 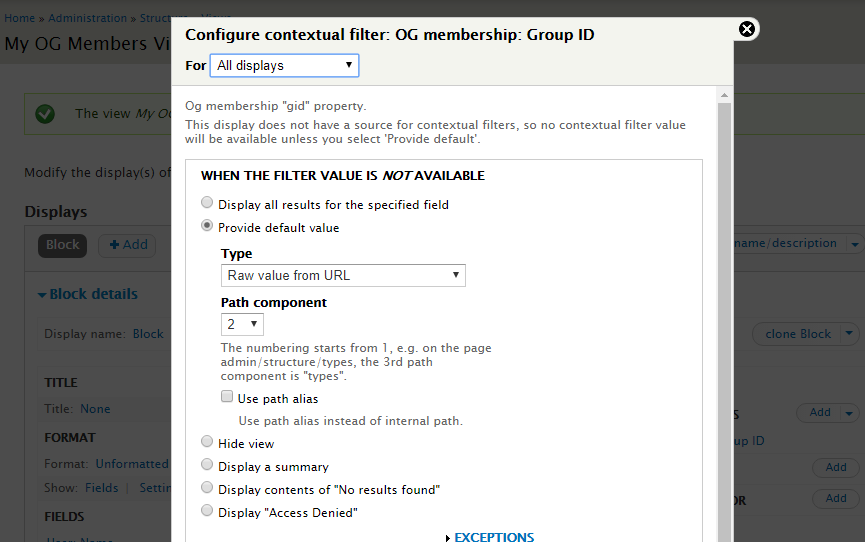 Rule: This rule runs on Cron, grabs the Groups from View 1 and sends each group to a rule component. 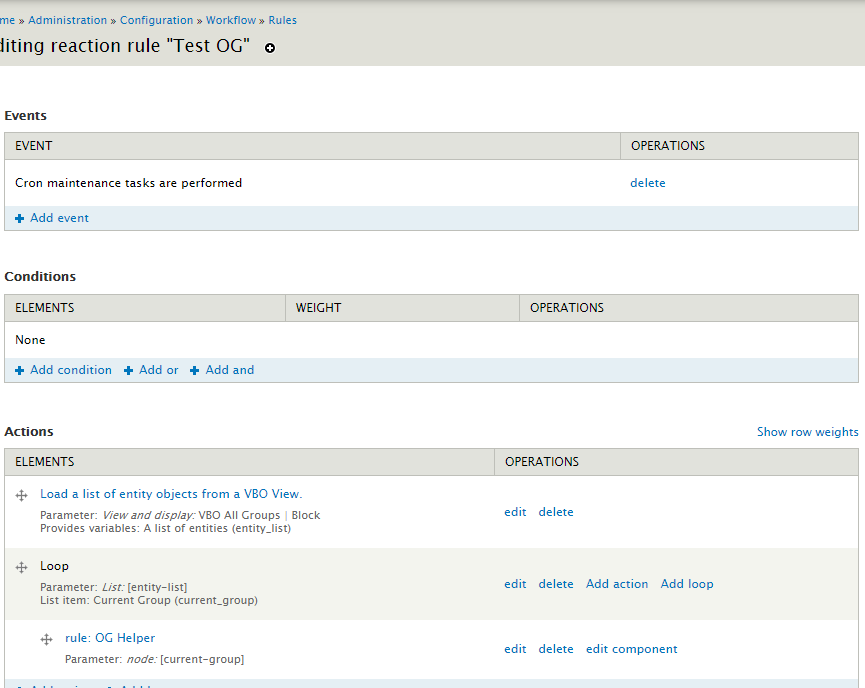 Rule Component: This sends each group to View 2 and returns a list of users. The "body" condition and drupal message is to show how to use the group's fields in an email.

I tested external cron with creating some nodes with user details and it worked fine. It looks complicated but is pretty easy, even with having to apply the patch.

What I haven't included here is an extra field on your content type that you would use as a filter in View 1 and change in your Rule so that emails only get sent once.

Not the answer you're looking for? Browse other questions tagged rules organic-groups or ask your own question.

2
How to use cron to delete nodes of a content type that does not allow deletion by anonymous users
1
If field date is 15 days away from today, change another field value

2
How to collect a list of file URLs using Rules and send a single email containing that list?
0
How to send an email 1 minute after a node is created or updated by using a scheduled Rules Component?
3
How to create a rule triggered when saving a node to schedule sending an email at specified date?
1
How to automatically add new users to a OG Group (MyCommunity) using Rules?
0
How to send email to all members when a post is updated by user?
2
Rules data comparison: compare node field with a group
1
Display Date field in email body with rules module
1
Weform: Send email to the email field in the node reference field using rules
1
How to send a Group email based on date field using Rules?