Forms has hidden inputs in the components to collect UTM values from the URL. 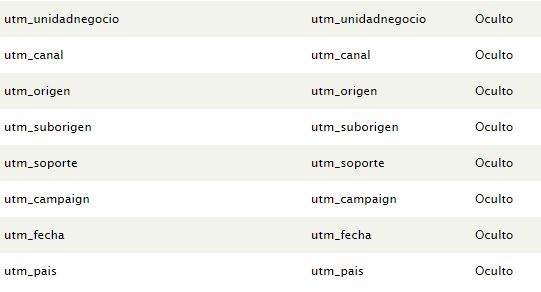 Once the form was filled in, the submission appeares correctly in the results table, both the public fields like the name, surname, etc ... as the content of the utm.

Recently, the new forms created do not store utm values, not even the cloned forms of a functional form.

Identical forms, in some takes the UTMs (forms with some time), in others not (created / cloned recently). Even shown in the same view.

I have tried to see with the devel module if there was a failure when interpreting the forms or the hidden fields ... without result.

Any idea or direction where the problem could go?

Thanks for your time.

The answer here provides the method you can use to pass URL query variables into hidden fields in webform.

What you need to do is assign a default value to each field which uses a token representing the query variable. So, for example, the field for "utm_unidad" should have a default value of:

And so on for the other fields.

Not the answer you're looking for? Browse other questions tagged webforms or ask your own question.