I'm trying to setup a custom submit handler, so I can change the redirect URL after submitting comments. Edit: I just want to send users back to the page they were viewing to begin with, but it's a webform with a couple of route parameters, so I need to save them somehow.

This works (the function is called and I see the debug messages):

Here's a screenshot of the kint($form['actions']): 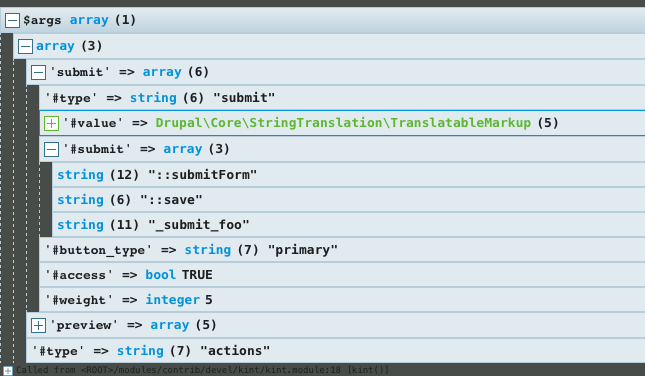 The comment form sets an #action to the comment.reply route, which will rebuild the form and no longer go inside your condition as the route there is differdnt.

Whatever you're trying to do exactly, you need to find a different way to do it.

Solution: Berdir pointed out I could just use '?destination' - you don't even need a custom handler. Here's what I did if anyone wants the code - you can make this even shorter just using \Drupal::service('path.current')->getPath(); rather than deconstructing and rebuilding the entire route):

Be aware, as per comments on the API page, if you use the $form_id parameter, it's different depending on the operation.

Not the answer you're looking for? Browse other questions tagged 8 hooks routes comments or ask your own question.

1
Return value on a submit handler
0
How to give custom function in D8 custom field widget class?
0
How do I check login?
0
Load form and use custom submit handler
0
Access data from previously submitted values in buildForm in FormBase plugin
2
Why is my form only redirected sometimes?
1
What is the proper way to show a visitor an error?
0
“Route ”ctf.content“ does not exist” when installing custom module