Controlling a dependent field in a multi-instance paragraph

The fields below are part of the node/add node/edit forms of my custom node type. 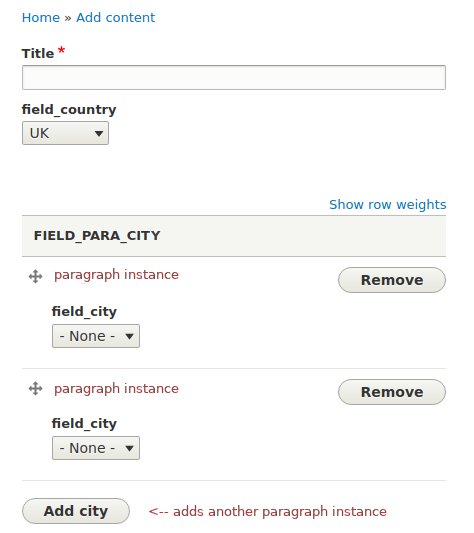 The paragraph field_para_city contain one field_city. (I later need to add other fields in the paragraph).

The user can add multiple instances from field_para_city.

field_city has an allowed_values_function defined in a YML file, which returns all possible cities from all countries.

I created a class MyNodeTypeForm extends NodeForm, with a public function buildForm(). This function adds AJAX to field_country so that when it changes (i.e. the user chooses a country) it (re-)populates all the existing instances of field_city (inside the field_para_city instances) with corresponding list of cities (e.g., London and Cardiff for the UK).

In MY_MODULE.module, I added the following so that the above code is executed on the node/add and node/edit forms.

The user would then need to re-select from field_country to get the correct cities again.

I tried to capture the state of field_country in the field_city's allowed_values_function, so that the allowed options are dynamically and directly set based on the user choice of country, but $form_state was not recognised there.

I know this is an incorrect approach!

What is the correct better approach to implement this simple use case?

I managed to make it work using a different approach; instead of overriding the NodeFrom, I used hook_field_widget_WIDGET_TYPE_form_alter and edited the subform array there.
Example:
/** * Implements hook_field_widget_WIDGET_TYPE_form_alter(). */ function MY_MODULE_field_widget_entity_reference_paragraphs_form_alter(&$element, \Drupal\Core\Form\FormStateInterface $form_state, $context) { //Logic to exclude other Paragraph types if ($element['#paragraph_type'] !== 'YOUR_PARAGRAPH_TYPE'){ //e.g. cities return; } $element['subform']['field_places']['#states'] = [ 'visible' => [ [ //It worked for me with the ID of the select, I think you can use the name also '#edit-field-cities-0-subform-field-city' => array('value' => 'Cairo'), ] ] ]; } When I add another paragraph, the ajax is fired and the selection is still preserved.
I haven't tried with other Ajax fields present though.

These are three important things to make it working

B. On parent select box set unique id(same uniqueid which is set in child dropdown) as [#ajax][wrapper], use [#ajax][method] as html .

C. In the Ajax callback use HtmlCommand() as Ajax response .

as per link. it also have github link for source

Have you tried using the Business Rules module? It provides this functionality. You may need a patch from Add AJAX support to Paragraphs if it hasn't been merged yet.

Not the answer you're looking for? Browse other questions tagged 8 forms ajax paragraphs or ask your own question.

2
Address field validation-- how to allow only English/single-byte characters?
0
ajax modified form drop down doesn't save
1
Programmatically load 'add content' form for custom content type in form or block plugin
2
Migrate multi-value paragraph field
0
Suppress form_id, op and other similar values from the query string on a GET form submission
0
Do private properties persist between submissions on multi-step form?
1
Ajax error when trying to add another paragraph