Getting a view of unique years of a date field

We have the press releases as a block display of a view of articles. Using this question, I was able to add a contextual filter that would accept a four-digit year.

Now I need to make the UI widget for the user to specify the year to filter on. I want it to be populated by the Release Dates of the article nodes, so that we automatically have all the years appearing in the filter, and don't have to manually add a new one when a new year rolls around.

However I'm having difficulty finding how to get the distinct values of the year part of the Release Date date field. I've created a display of just the release date field, and set the "Date format" to HTML Year (2019). I added aggregation, and for the Aggregation settings of the field, the "Aggregation type" is Group results together, and the "Group Column" is Value. I've also set checked Distinct in query settings.

However, when I look at the preview, I see a number of repetitions of the year. When I add in the full Release Date field, I see that I am getting one year per distinct date in that year. It seems that the query is pulling each unique date (which is all Article nodes-- none of them share a date), and then doing the formatting (to show only the year) after the select has been performed.

I looked at the Query preview, and it seems that this is indeed what is happening:

I don't understand why it's grouping first by nid, and then also the created date at the end.

FWIW here is the entire query:

Is it possible to get this type of result set with Drupal 8 views? If so, what settings do I need? Is there a module or extension I need to employ?

Edit User prkos suggested using an exposed filter, perhaps with the better_exposed_filter module. I've since gone down this alley, and it doesn't seem to meet the requirements. The basic problem is that, since views only looks at the entire date value, I can't specify a year to filter on at all (the interface and options for exposed filters is completely different from contextual filters). It also seems to run in to the problem that it can't auto-populate filter widgets with unique years, which is the issue I'm asking about in this question.

When I add an exposed filter, a "Single filter" type only allows entire dates, or relative dates:

When I hard-coded a value (2015) to test, as in the screenshot above, the view returned no results. This is because the filter is turning the year into a particular date in the query:

When I look at Group Filters, there seem to be two issues: 1. groupings must be manually specified, which is the sort of maintenance I'm looking to avoid, and 2. it still only accepts an entire date, and can't handle a year specification.

I also installed better_exposed_filters, but it doesn't seem to provide any of the features I'm looking for.

Edit 2 Following the instructions in the first half of prkos' answer, I was able to get a list of unique year values: 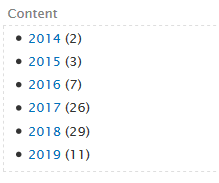 But, I don't see how to use it as a filtering widget for end-users. The results are links, but they each only link to the /press-releases URL. Because I'm getting the contextual filter value from a query parameter, I need the links to look like /press-release?year=2014. But, because they are summary results from the contextual filter, and not fields, I can't re-write them.

So I guess this technically answers my question of how to get a view of unique years, but it doesn't give me something that I can work into a usable UI widget. I'm going to accept this answer, and ask about how to create the useable widget in another question.

As per prkos' suggestion, I looked at the summary results on the page, instead of just the view preview (I was pretty sure I had done this earlier, but of course you should always double-check your work).

I found that the links were not automatically populated with the value of the filter.

Here my mouse is hovering over the '2014' in FF. The screenshot doesn't capture the mouse cursor icon, but you can see which link is being hovered over, because its styled as a darker magenta color than the others: 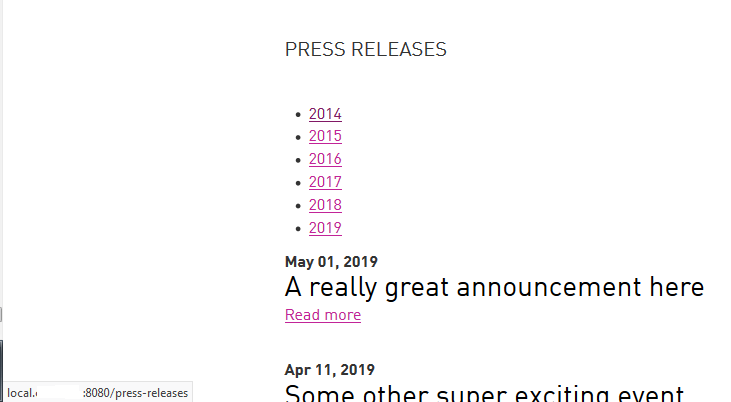 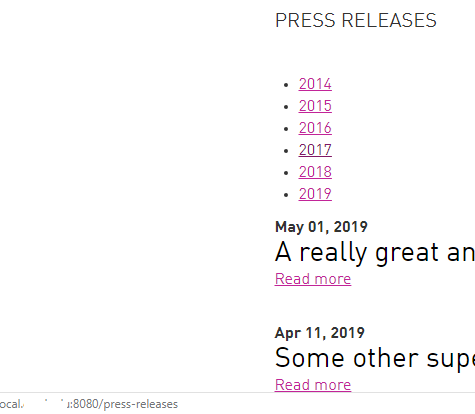 So in the tests above, I was testing the summary view in the header of the press releases block. To make sure this wasn't a problem with a view-within-view, or anything, I copied the summary block display as a page. The page showed the same behavior: 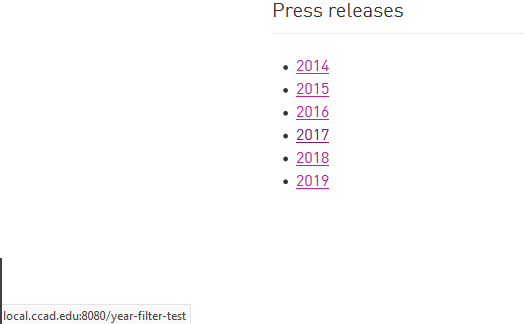 I don't know why the summary links on the page display were going to /year-filter-test-- that's the path of that page display.

I may be misunderstanding what you're trying to achieve but looking at your screenshots I don't see why you wouldn't be able to achieve what you're after.

Use the Summary option on the Contextual Filter

You mentioned you got the Contextual filter to take the year as an argument (in another question). All you have to do is use the Summary option of that filter to do it all for you.

It will "see" what years are present in your results for that particular field, list those years as links, you can even opt to show how many results there are under each year, and when you click through one of those links you'll see the results filtered for that year alone.

Here is what adding the Contextual may look like: 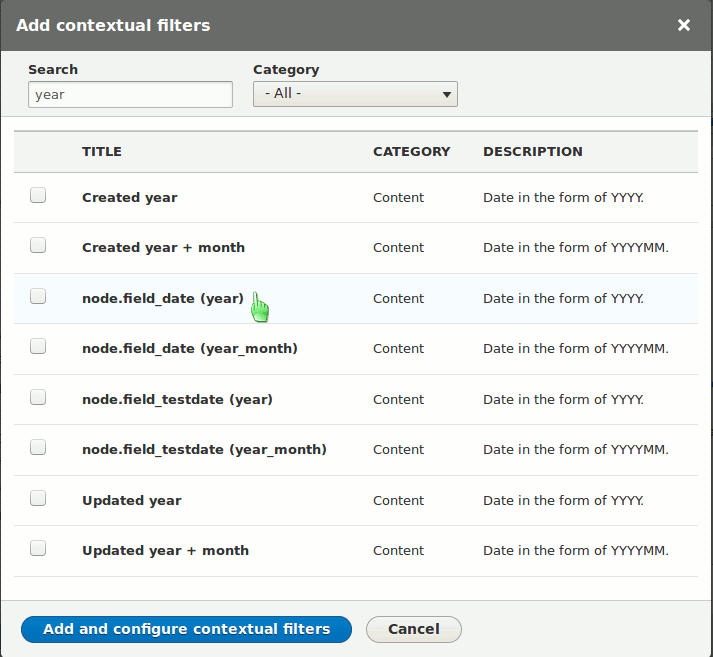 Here's how you configure it: 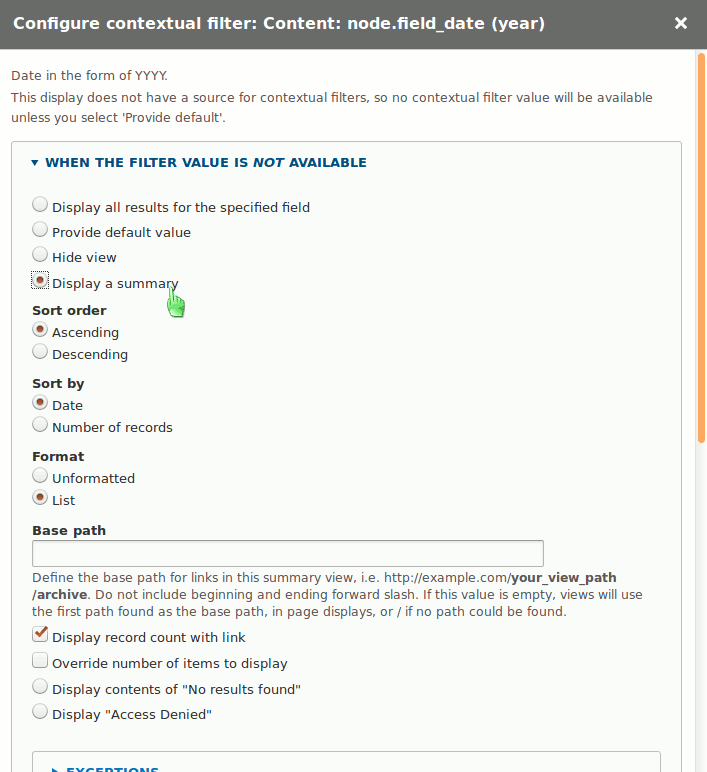 You must include the Base path if the Page display you're using isn't the first one in your Views, otherwise it won't work.

You can also set the Specify validation criteria further below to Date format, and some other options depending on your needs.

How to group Date ranges Filter

This isn't what you're after because it requires adding each year manually, but since you posted the screenshot I'll post what the correct configuration for that should look like: 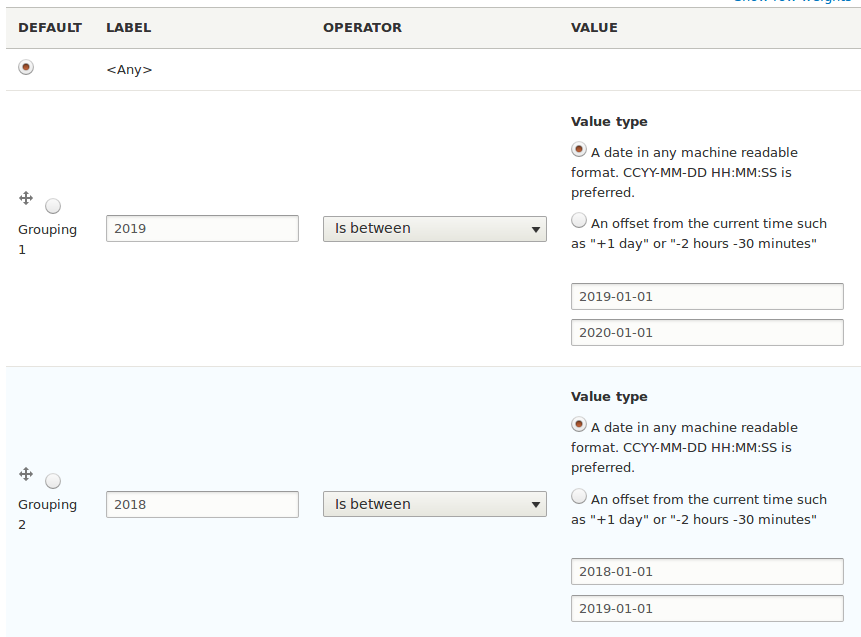 You can omit the time if you set the correct dates for the In between, as I did, because of the assumed values.

Here is what the Exposed Grouped Date filter can look like:

The Better Exposed Filters was suggested to have more control over some Exposed filters, to show radio buttons/checkboxes instead of the Autocomplete field in some cases, since you wanted to be presented with options, instead of users typing them out on their own. You don't need it though when Contextual Summary is doing it for you.

I am going to go ahead and say No, this feature is not available in Drupal 8 at at the time of this writing.

Presently Drupal 8 views is not able to return unique year values of a date field. This is because the view selects the entire date of the date field, and then can only operate on those.

Also Exposed filters can only filter on a specific day date; it can't use an entire month or year (even though contextual filters has this ability, exposed filters does not seem to).

If this answer becomes outdated or is incorrect, please add the answer.