I have the need to set visibility state of a checkbox option in one question (Table checkbox select) based on the value of another checkbox in the same table. I also have other scenarios where I would need same functionality but across different questions in the same webform.

I know I can easily do it between two questions with the built in conditional logic UI in webform but no such UI option for my case now (afaik) so I'm trying to set it via the custom one and this is my first time with form states and custom condition in webform so I appreciate your kind help so greatly.

I went through trials and errors and the code wasn't being saved till I, thanks to @jrockowitz 's tip, learnt that I was using php code where I need to use yaml code since I'm using the yaml source editor (shown in the screenshot below). When I fixed that, my custom code would save and it reflects as entered in the webform source yaml. However, the custom condition is still not working as expected and I'm still not sure why.

I'm adding the code in the Edit source box accessible via clicking its link on the form "Conditions" tab: 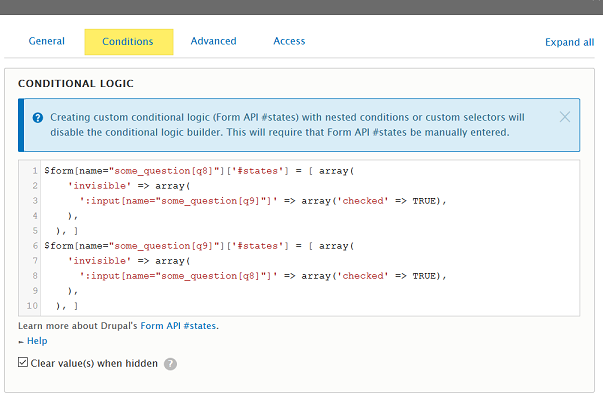 *NOTE: The code shown above in the screenshot was the wrong one (php code) I was using in the yaml editor. This wasted me lots of time till I learnt it's wrong.

I got the selectors for the involved question options from the "Available selectors" list by clicking on the "Help" link under "Learn more about Drupal's Form API #states." on the "Conditional Logic" for the element editing tab in my webform.

This is my code now as shown in the custom yaml source editor and saved in the webform yaml but it's not functioning still (q2 question not hidden when q1 is checked):

What am I missing here ?!

For the simple case where Question 2 is shown only if Question 1 is left unchecked, your YAML doesn't look right to me. If you're editing YAML in the conditions tab for the Question 2 checkbox, then just the last 3 lines should suffice:

I don't think you want the "#states" key to be in there anywhere, nor do you want to include any selector information for Question 2.

That's if the YAML is part of Question 2's Condition source. If on the other hand the YAML you're showing is part of the form's source, then it should probably look something like this:

Note that the #states key is shown here, but only once - we're omitting 2 out of 3 of the same lines as above.

Not the answer you're looking for? Browse other questions tagged 8 webforms or ask your own question.

0
Which files do I need to edit to alter webform #states with hook_form_alter?
0
custom webform time and date elements id's

4
Controlling the display order of custom field sets that are shown both in a webform and in CiviCRM, via the webform_civicrm integration module
0
Dynamic webforms workflow
1
How To Alter Web Form Elements Permanently?
1
Webform: Hide the “add more” button
0
Webform Message / Custom Module
0
Which files do I need to edit to alter webform #states with hook_form_alter?
0
Is there a built-in “None of the above” checkbox option in webform? and how to create one?