I'm using a global custom text field within a view that is meant to display an embedded youtube video. 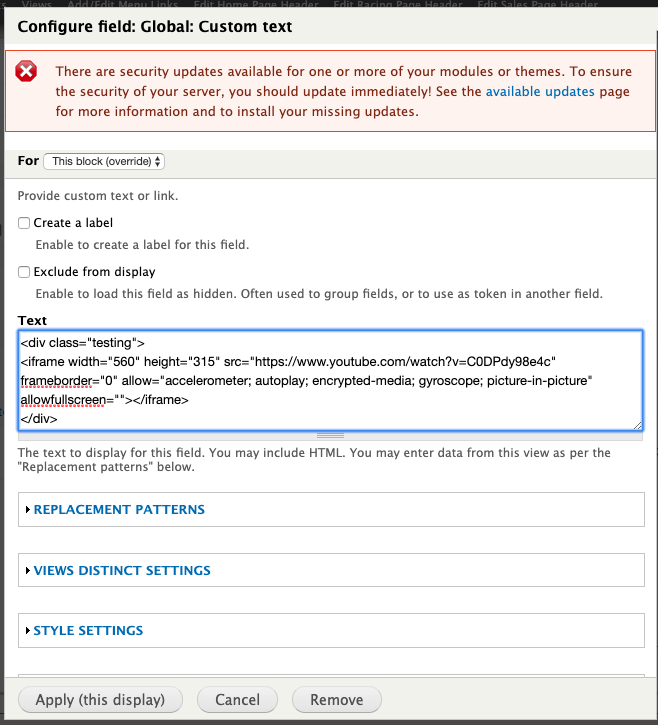 However in the actual render of the view it's completely removed from the dom.

My first assumption was that ckeditor was not allowing the iframe tag and removing it itself. However I have it setup to allow iframe tags, and if I go back and edit the Global Custom text it still appears. If it didn't allow it I'm assuming it would not appear in the editor the next time I open and edit the field.

Also I'm able to embed iframes in the body text of nodes just fine. It's specifically in views.

I also attempted creating iframes with different src's in different divs but I still had the same behavior.

EDIT: Forgot to mention that 'Strip HTML tags' is also turned off.

This is not the expected behavior of drupal views, Drupal Views usually not doing this. I have done this before, and global text with iframe is working with no issue. Maybe you have another issue like some javascript issue to prevent the load iframe form another site, see the console of your webpage maybe you got some error.

You can debug also by putting that iframe into any page Textarea field where you already use the HTML content of your website.

Check in the view preview whether the iframe shows there. If it does, your issue is with your theme, most likely, or some module, but not Views.

1
Filter strong and b from content through views
0
Access variables populated in one page function for a different page function? Always null
2
Multiple AJAX "add more" buttons on one form, with default_value from db
2
How to customize how field is displayed in view
0
Custom view mode issues
0
iframe in - rewrite results - Override the output of this field with custom text
0
Change the way nested views behave