VBO: "Change owner" Vs "Change the author of content"

I would like to change the author of a content for a bunch of nodes. So I've chosen Views Bulk Operations (VBO) module to achieve it.

Part of it, created a VBO view, but in the VBO options I see "Change owner" and "Change the author of content" (shown below). 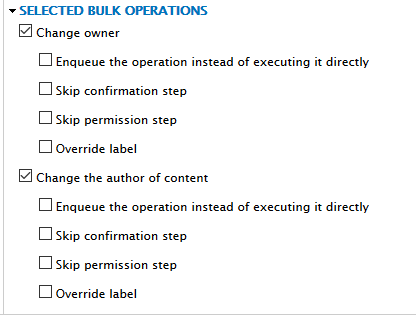 The VBO module implements that action for any entity for which that action makes sense. (In other words, if the entity doesn't have an owner, the action is not implemented for that entity.) Apart that, the underline code doesn't change much.

The obvious difference is that the VBO action implementation doesn't log for which node the owner has been changed. When changing the owner for many nodes, its implementation could be faster than the Node module one.

3
A Rule component to change author on nodes?
0
display list of pages of content type using views + edit and delete option
4
Change node language from Language neutral to English in bulk using VBO
0
Adding “Unblock the user” option in Views Bulk Operations field
2
How to move VBO button to under view
0
VBO action on pending node revision (using Revisioning) publishes the revision
1
Unable to change the author of content using views/action
2
How to add a comment form in VBO to add the same comment to mutiple nodes?
1
Are Drush vbo-execute actions supported?