What does the embed display type do?

I've been trying to find an answer but any search for views embed display brings up a bunch of unrelated modules and questions.

There is a Views Display Type/Mode/Whatever called "Embed" that you select when creating different views in your view: 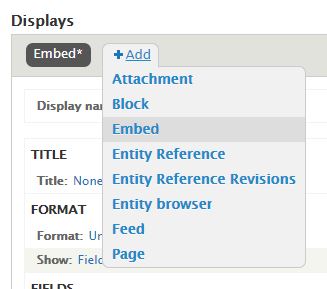 For what can I use this display type?

This is a display which can be embedded via views_embed_view() or drupal_view() of Twig Tweak.

You can embed other display types, too, for example Page or Block, but the first one generates a route and the second one a block derivate you see when adding blocks to the block layout. So Embed is basically a display type which does nothing until you embed it in code.

The only explanation you can find in Views UI is in the general settings, where there is this checkbox:

Embedded displays can be used in code via views_embed_view().

Which by the way is without function and there is an open issue to remove it.

Not the answer you're looking for? Browse other questions tagged views 8 or ask your own question.

2
How to display nodes in a view, each row using a preselected view mode ?
1
display question content type and a referenced node answer
1
Expose only a specific content type to Views
1
Display specific profile type in Views
2
Documentation of Drupal Content Types and Views
1
Issue with Entity Reference and Views
5
How to duplicate a display (which is not the master) as a different display type?
1
Why does 'Search Question' of the Answers module not show any results?
1
How to split up a View up amongst different Panels panes? Context display?
0
Theme video-embed-iframe.html.twig by content type