I use Drupal 7 with Views and want to override some node field output in a view (namely change its Title to something I want). To accomplish that I set the view to display Fields and not Context or Rendered Entity and select Title and Body from the list of fields. And here is where the problem lies:

I have a (homemade) module that makes use of hook_node_view() hook to modify Body and Teaser text. When I display article body as a Field in the Views this hook for some strange reason is not called (on Context and Rendered Entity all works correctly). So I need a way to either:

Is there a way to do it?

Upd 2: Okay, I did some Drupal colonoscopy and it even works though I can't say whether it is the right way to do things (probably not). I found out that when you render context Drupal apparently thinks you want to render a normal node but when you render fields Drupal is at a loss and doesn't think you're dealing with nodes anymore. Thus it doesn't fire any node hooks including hook_node_view(). If anyone still needs to run their functionality of hook_node_view($node, $view_mode, $langcode) they can use hook_views_pre_render(&$view) though access to node $view_mode and $langcode will be gone.

I personally thought it to be tiresome and bothersome to deal with fields (they mess up all my CSS) and found a hack in Views 7.x-3.3: if you set Show parameter in your view to Fields and select Material:Rendered Material AND any other field (you can exclude it from display, just make sure Rendered Material is not the only field you load) you'll get a neat and tidy Node object at $view->result->_field_data. I fail to explain how it is so but it's there, and you can bend it to your needs, and what is even better Drupal will think you're rendering a node and fire all node hooks on it. I pray though that Views coders won't remove this wonderful hack in later versions ruining my code.

Here is the code:

The title of your question is.

One way of fixing hook_node_view not being called, would be to actually render the nodes.

If the problem is that the field is not rendered as you which, the best way of dealing with that, would be to alter the rendering of the fields, instead of trying to make Drupal act like you're rendering a node when in fact you're not.

The easiest, cleanest and most flexible way to do that, would be to create some custom field formatters for the fields in question. Field formatters are like theme functions for the fields, and you can in views select which field formatter to use when you want to render a field. It requires some work, but gives great flexibility. That would make your hook_node_view obsolete as you can use field formatters when fields are rendered under the manage display tab in the field settings interface.

to override the field you can check this image 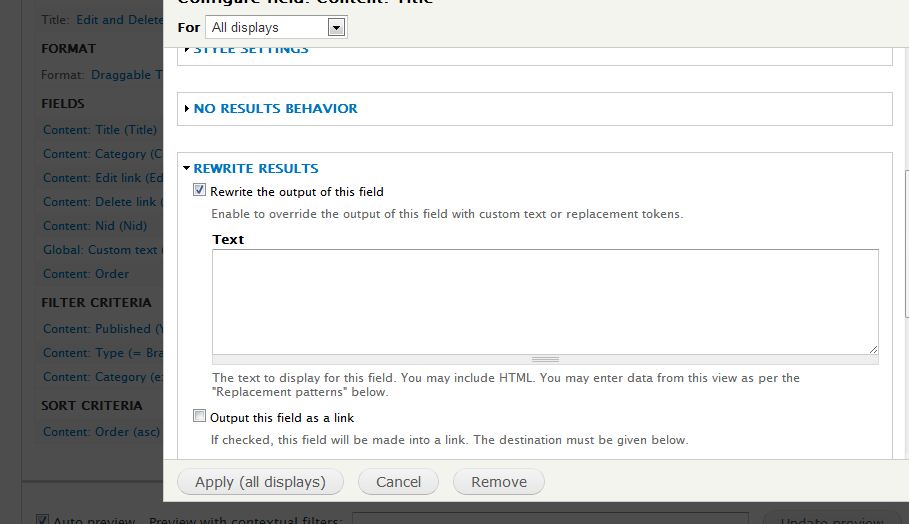 Not the answer you're looking for? Browse other questions tagged 7 views hooks or ask your own question.

2
How to define another teaser for the second theme?
2
%1 doesn't get converted to taxonomy name when overriding title
0
Display only the terms in the filter set using Views
3
Render fields in node template with different view mode
1
Passing context to a block field of a display suite node
0
Paging issue in views when implements node access
1
Taxonomy Term description in views when “no results” (Haven't associated nodes)
0
Changing '#view_mode' in content type's render array
0
Can You Render Data from Forced Fields in Views While Using format “Show: Content”