I add a CSS file (mymovies.css) to a custom form (SeenMovies) in a custom module (eric) with this code I inserted at the end of buildForm

and this code in eric.libraries.yml

But my css doesn't override bootstrap.min.css as you can see in Firefox inspector: 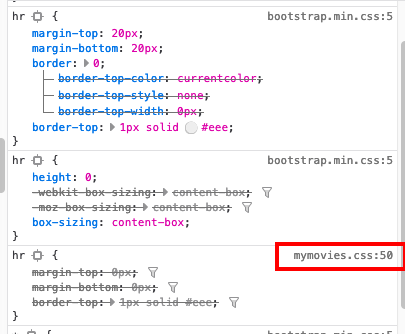 How can I fix that?

This question has nothing to do with Drupal but with CSS order of precedence. If more than one identical CSS rules are found, the last one takes precedence.

As @leymannx pointed in their comment, your page is loading first your CSS file, then Bootstrap. Just move your Bootstrap into a new library as you just did with 'mymovies', then add a dependency to 'mymovies'. Declaring it as a dependency, it will load first the need libraries, then the library being called.

Edit - after saying you are using OnePage Zymphonies theme:

If you check 'onepage_zymphonies_theme.libraries.yml' you will see that the Bootstrap library is defined. Following my answer:

Finally, I used the advice from @leymannx and changed my css to

where 'seen-movies' is my form id.

Instead of adding an additional selector for all the css in future to override the bootstrap css you can try using the weight flag of libraries like this:

Just determine the weight of bootstrap library and replace N with the number greater than that.

In this way your mymovies.css will load after bootstrap css and you will no longer need to write that extra selector

Not the answer you're looking for? Browse other questions tagged 8 theming or ask your own question.

0
Override theme css with custom styles
0
Css files of liberary can not be load
3
How to theme back end forms created by a custom module?
0
Why is hook_update not fully taken into account?
0
Disable CSS and JS from a contributed module
0
Attach custom css library to entity print output