I'm working on a custom module (my_module) which provides some functionality to a specific paragraph type (my_paragraph) created from the user interface. In my routing file, I have the following route definition.

Now I add a new entity reference field (field_paragraph) to the Basic page content type. Using this field I can add my_paragraph along with other paragraph types.

I'm actually refactoring an old custom module I wrote and trying to move away from the hooks approach if possible. One of the main motivations for me by refactoring is I can use one or more services (together with dependency injections) to separate all the possible logics here.

The problem here is that controllers are specifically intended to return a result based on a given path. The result you want isn't dependent on a path, but rather on an operation performed on an entity.

What you'll want to use instead is one of the entity API hooks, found here: Entity CRUD, editing and view hooks

To respond to your entity being created, I recommend using: hook_ENTITY_TYPE_insert()

Similarly, if you need to update field_paragraph when you update your node, implement hook_ENTITY_TYPE_update().

In Drupal 8, routes and hooks have different purposes. Routes are for rendering a page containing information, while hooks are used to react to an event or to alter the information returned from other modules.

I assume you need to show information, and a controller is really what you need. (The rest of the answer will consider the case you really need a hook.)

The first point to keep in mind is that each path can only have a single controller. When Drupal is showing the page at /node/123, for example, only the controller that renders the node view is called. No other controllers will be used.
That doesn't mean the node can just be viewed and not, for example, edited, deleted, or translated. Drupal shows tabs that allow to take different actions on that node, or to show information that is related to that node. 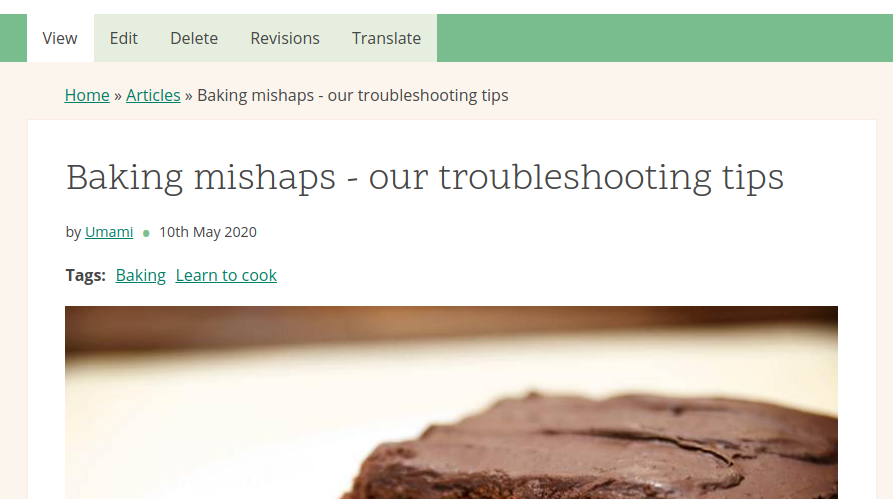 (The screenshot is taken from the Drupal Umami Demo.)

Defining a tab controller it's done in two steps. (I will show what Drupal core does for /node/{node}/revisions.)

If instead what you need is really a hook, then you just need to implement it. As for using a more OOP approach, the Content Moderation module shows how to achieve that, for example, in its content_moderation_entity_insert().

The EntityOperations class is merely a class implementing ContainerInjectionInterface and it can therefore use Dependency Injection.

Not the answer you're looking for? Browse other questions tagged routes paragraphs or ask your own question.