How to notify user using ->messenger() and ajax?

I would like to send a message to the user on an event in the backend without a refresh. I have a 2fa login form that will send a token text. That form has a "did not receive sms" button/link using ajax that causes the text to be sent again. I would like to inform the customer of the incoming message.

You can send a notification to the user using the MessengerInterface. But this requires a refresh to show the message.

I would imagine that there is a way to send a message to the user using ajax/XHR? Which would not require a refresh.

My form has a wrapping div which I can target, the button/link has an '#ajax' element with, as far as I know, all the prerequisite elements:

I found this comment on the Drupal forum but using this code, with obvious replacements, does nothing apart from sending a XHR response, visible in the network tab. The json response contains a number of things one being the html for the form which contains the message that I would like to show, but it doesn't show this content on the actual page.

What am I missing?

The wrapping element was (is) not rendering for some reason, if I include it in the template the callback shows the messages in that element at the top of the form.

The problem is that I need to renew the entire form because the contents might change on the ajax call. Replacing the contents works when I actually enclose the form in the wrapper element, but then the messages are no longer included.

I can see that the messages are part of the response but separate from the form contents. Second element messages third element the new form. The strange thing is the message are also not shown on a refresh. 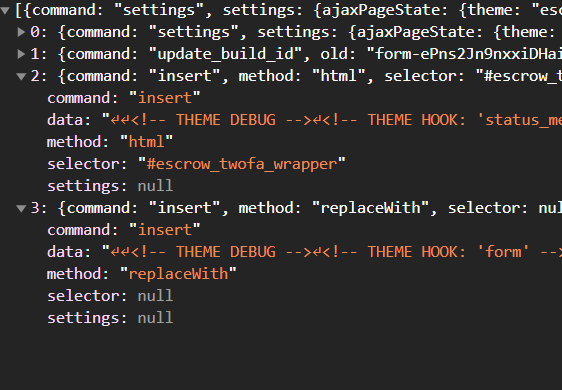 This works for me:

Not the answer you're looking for? Browse other questions tagged 8 ajax or ask your own question.

0
dependent dropdowns in ajax
1
How to change checkboxes options with ajax callback
2
AJAX returns response code 200, and displays error messages in callbacks
1
How to update one select element via Ajax when using node_add
1
How do other modules update elements using AJAX callbacks?
1
Is there an event before and after form is submitted via ajax?
1
How to debug ajax in form?
0
Drupal 8 Forms/Webforms Ajax Callback Elements
0
Dynamic Registration Form submission using vanilla Javascript ajax