Which releases are supported with semantic versioning of modules?

I have a site running Drupal 8.9.13. I have enabled email notification for "only security updates" and it generally works well - I get a mail for "urgent things" otherwise I wait and apply ordinary updates once a month.

Today I received a warning about an unsupported release. When I check, all I find is an available update. For this module, I am running 2.0.0 and 2.1.0 is available. According to the documentation about semantic versioning for Drupal modules, this is a change to the minor version. I don't see any reason why 2.0.0 is in fact unsupported.

From my perspective, this isn't an "urgent thing" and I don't want to be mailed about it every day. Under the "old" version numbering scheme, a minor version change such as 8.x-3.5 to 8.x-3.6 does not cause the same behaviour.

Is this a bug in the Drupal core update module? Or have I misunderstood how the new semantic version mechanism works?

You got an email because the 2.0.0 version has been marked as unsupported by the project maintainer when, on the Releases edit form, the Supported checkbox for that version has been deselected. 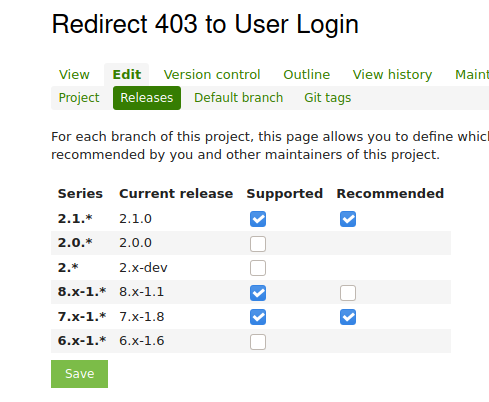 On Drupal.org, 2.x, 2.0.x, and 2.1.x are considered like three different branches, and have each the setting to make them supported or recommended.
It's not just a matter of version number, but also what the project maintainers mark as supported. Probably, if you had version 2.1.0 installed, that were marked as unsupported, and version 2.0.0 were marked supported, you would get an email telling you the version you installed got unsupported.

Not the answer you're looking for? Browse other questions tagged updating or ask your own question.