How do I set up an article view that validates both article and category?

I'm working with Drupal 7, and trying to get a view set up that will display blog categories and articles based on their category.

The category is a Taxonomy - Blog Categories - let's assume it's:

I've tried a ton of different combinations of relationships and contextual filters, but I just can't get it to work. The closest I can get is where all of the 'proper' urls work... I get category lists, or I get article displays... but I also still get a page when I go to a path with either an invalid taxonomy term or an invalid article name.

It seems like it should be something with the Contextual Filter validation stuff... but anything I've tried with like validation based on a taxonomy or whatever just stops anything from working. I no longer get listings or articles properly.

I've tried some of the stuff suggested by prkos but I'm not having any more success. I've attached some screenshots of my configs... with a little bit of censored stuff. It probably doesn't matter, but I'm expected to be circumspect. The original URL/Taxonomy I used isn't actually the final stuff, it was just example... so there might be some mismatch there. 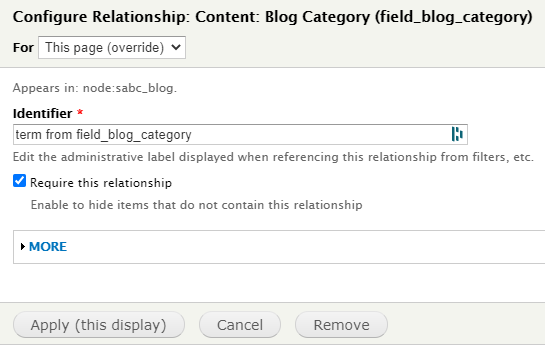 You can make the Validation through the Contextual filter.

When dealing with 2 Contextual filters it's always best to first fully configure each independently, make sure they work before you add both to work together.

Once all this is said, if all you need is path control in your site you can do that with Pathauto module to create aliases for your nodes based on categories and their titles.

Views only creates lists of content, it doesn't affect the core paths. You will still have the node/ID paths active on your system, and any path aliases you might have. You should take care not to create duplicate paths for the same content, as it can be considered duplicate content by search engines (it dilutes in any case), and it's confusing to users.

Not the answer you're looking for? Browse other questions tagged views taxonomy-terms or ask your own question.

8
How do I use contextual filters and relationships to show related articles?
0
Create a page filter with the last article of each category
0
View: How to make a list of article(in a block) related to the taxonomy term of my main article
1
In a view, how can I display all sub categories of a given taxonomy term with content from each sub category?
1
Displaying taxonomy terms and its contents with views
0
Display Nodes from Taxonomy Category Term and Parent Terms
4
Selecting taxonomy term in article and showing all articles titles associated with this term
4
How to use URL query parameter on a View Exposed Filter?
1
Commerce Product listing View with category contextual filter, How to show items of (selected term and its child terms)