Module is not longer supported on Drupal 8 but requires 8?

I'm updating a Drupal 8 site that hasn't been touched in about a year (just updated to 8.9.12). One of the module updates is Menu Token. 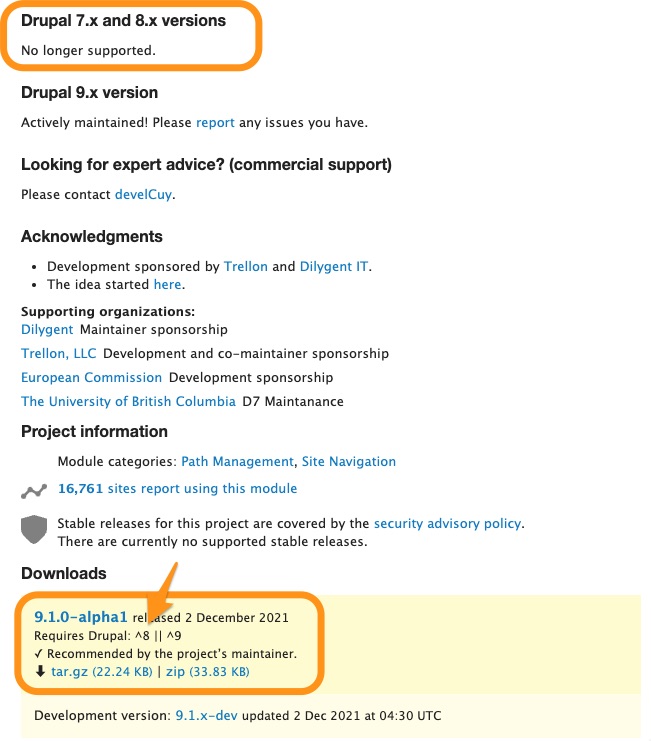 Yes, it should be fine to install.

Then why does it say "no longer supported"?

Drupal 8 is end of life, so it is no longer receiving feature fixes or security patches. As a result, work on Drupal 8 (but not 9) modules is no longer being done. So, there is "no support" because "only the Drupal 9 version is supported."

However, the module still works just as well as it did before support ended for Drupal 8-- it's safe to install.

In other words, "not supported" can be interpreted as "please don't file bug reports/feature requests if you are still on Drupal 8."

What does "requires" mean?

"Requires" in the Downloads section is a hard technical requirement-- you must have one of the listed versions of Drupal to install the module.

What reported as Requires Drupal: ^8 || ^9 isn't the required Drupal versions but, more exactly, the Drupal versions with which the module is compatible. A release that is compatible with Drupal 8 and Drupal 9 is usually necessary to migrate a site to Drupal 9.
That doesn't mean a module that is compatible with Drupal 8 is always safe to be installed on Drupal 8; it could contains a security issue when the module runs on Drupal 8 that nobody discovered. In the case a security issue is reported, it's up to the project maintainers fix it for Drupal 8.

Not the answer you're looking for? Browse other questions tagged updating or ask your own question.

1
Cron job run, but module updates not checked - how to automate?
4
Drupal 7 Update Module Not Working
9
Update fails because directories are locked by php-cgi.exe
0
Drupal not detecting the correct version number of a module?
0
Drush does not run command, but prints the php script
2
Drupal downloads the module update but need FTP
1
security updates reported but not actually available (recommended==installed)