Stack Overflow for Teams is moving to its own domain! When the migration is complete, you will access your Teams at stackoverflowteams.com, and they will no longer appear in the left sidebar on stackoverflow.com.

Check your email for updates.

I would like to have a custom template for links (edit, reply, deleted) for my custom Comment Type. (Drupal 9)

I spent a lot of time looking for a solution and did not find. Please, could you help me? 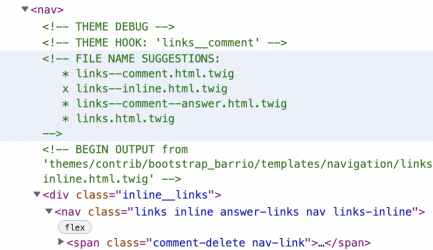 It happens because Drupal first collect all the theme suggestions following this order.

Inside the group of modules (or base themes) that implement the same hook, the invocation order is determined by system weight, then by module (or theme) name.

Once Drupal collects all the theme suggestions in an array, it reverts the order of those suggestions, which means the last suggestion becomes the first one.

This is done by ThemeManager::render(), for example, which uses the following code. (Notice the code following the "// >>> * <<<" comment I added.)

It then search for the first existing template file that matches the suggestions and uses that template file.

In your case, the suggested template files have been checked following this order. (This is shown in the debugging output shown in the screenshot.

If links--inline.twig.html has been suggested by the active theme, or one of its base themes, and the code shown in the question is implemented by a module, there isn't anything you can do, as a theme suggestion always take precedence over a module suggestion.

If links--comment.html.twig suggestion was done by module, and the code shown in the question is implemented by a module too, you need to increment your module's weight, for example calling module_set_weight() inside hook_install() or hook_update_N().