I am trying to wrap my head around the Drupal 7 framework using the debugger in eclipse. The thing is, I'm feeling a little overwhelmed with the endless function calls and watching data bounce back and countless number of times (I'm sure it could actually be counted with more patience).

What is the best way to understand what is going on and get a good overview of how everything fits together? Is using just a debugger the wrong approach?

Using a debugger to understand which function called another one is not necessary all the time. If you look at the documentation on api.drupal.org, for example for user_load_by_name(), you will notice the documentation shows the number of functions calling it, which is also a link to a page listing them.

In the case of hooks, such as hook_field_info(), the documentation page shows how many functions are implementations of that hook, and the number of functions invoking that hook. 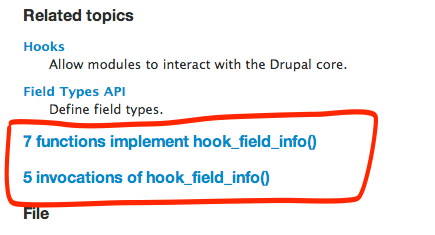 In some cases, the documentation page lists the functions that reference a function, such as in the case of system_batch_page().

The documentation on api.drupal.org includes some sections that describe a group of functions correlated to each other, for example in Batch operations. The list of all the groups is on Topics.

Other topics are linked in the API reference page.

Not the answer you're looking for? Browse other questions tagged 7 debugging or ask your own question.

13
How to improve Drupal speed when developing in localhost
2
Best way to go about my news menu item
1
Drupal 7 Views, paths, node associations via taxonomy
0
Developing a mobile website
4
A General Strategy for Images with Captions in Content
1
How to find out allowed memory for a specific Drupal page
2
How to debug / log comments when developing a custom module to fire when cron is run
7
Drupal Settings for PHPStorm
0
Stuck developing a new library module for “vminpoly”. “Drupal.behaviors” confusion