Performance and optimisation when using panels with views and content pane

I would like to know if there is a best practice when we use panels with views and content pane?

Some explanation: I have a layout with multiple blocks (related to the taxonomy etc.) and a main content.

I'm asking myself what is the best way to have the better result in term of performance: I made many content pane for my views (as many as there are blocks, see my picture for a better understanding)

But i don't know if it's very good to do that.

I would like to know if it's not better to do just one content pane and to check or uncheck the fields that i want in each block. 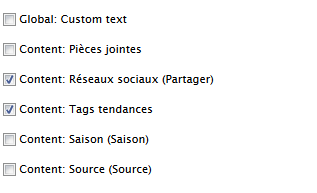 My site i slow so i try to optimize it. I don't know how panels works "behind the scene".

The primary thing you should do, is cache as much rendered output as you can. If you cache the generated markup itself, whether you're Views configuration is optimal mostly becomes a non-issue.

Views itself, can be cached with Views content cache, or if you complicated invalidation criteria, with a long timed cache and Cache actions.

More experimental, is a module I've written myself, called Panels cache, which moves the caching one layer higher up, for even better performance, but it requires that the content being cached all comes from the same entity. (I use the module in production, but would still love testing and feedback on the module)

On the actual Views configuration, you should avoid having a single with multiple panes, if you have a lot of overrides. If your displays are significantly different, you waste processing time as builds must build and then alter the display. This however, will be a very small optimization, compared to the caching solutions suggested above.

You can read about more different performance improvements in my answer on How do you improve Drupal performance?

Not the answer you're looking for? Browse other questions tagged views panels or ask your own question.

2
Drupal 7 "Panel Nodes" Content Pane Contextual Filter
3
How to pass the query string used to access a page in a link in a views content pane?
1
How to get Panels to pass a correct date to Views (D7, Views/Panels3)
1
Multiple views to be displayed on a panels site
0
Display Suite and Views - how to troubleshoot why a View content pane is not being applied?