How to add CSS classes to a Views-generated block? (NOT to its generated content, the block itself!)

I don't know why, but Views doesn't add "human-readable" CSS class names (like e.g. the machine name of the view) to the blocks it creates (it only adds its classes to the generated "content" part when adding classes to the "CSS class" part in the view editor (see the screenshots below!)).
It only adds the usual block block-views, and possibly contextual-links-region CSS classes to the block(s), and generates a unique id (not class) like this: block-views-3d8f7966168beeec655c8ead69336789 (because its delta is this generated hash code).
It doesn't make sense to write CSS rules for these classes and ids (like .block-views-3d8f7966168beeec655c8ead69336789 { /* ... */ }), because these classes/ids might change when altering the Views block.

How can I add some custom CSS classes in an implementation of hook_block_view_alter(), if I cannot even identify these blocks because of their generated hash delta?

I do not want to use Block Class, because I feel it's like an overkill for just adding some classes to one or two Views-generated blocks (BTW I checked the module, and I feel SELECT css_class, module, delta FROM {block_class} query in block_class_preprocess_block() like an overkill, because it checks ALL the added classes, even if the block is hidden...).

So I would like to solve it from my own module.

My view with the machine name and the added CSS classes: 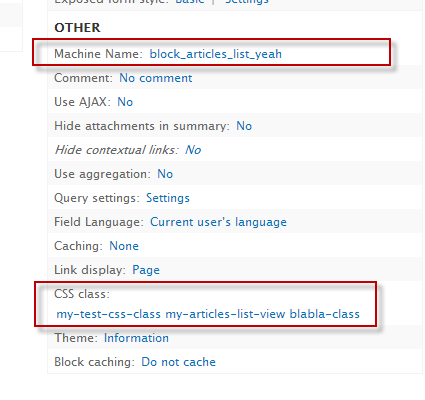 The generated block's HTML code in the inspector:

First. You have "hash" - because you view machine name is too long.

Second - you can add your own classes to view 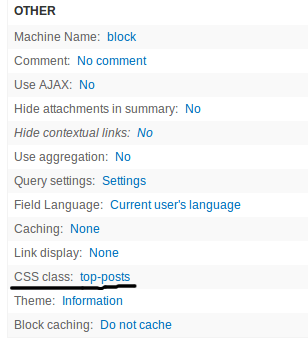 That's a old question, but there is no proper answer. I came across the same problem. The solutions I could think of was CSS parent selector (which doesn't exists yet) OR some Drupal manipulation.

I added a hook_preprocess_block to add a wrapper CSS class to all view blocks that define a CSS class. That's not trivial so I will put my code here. It may not work with all view blocks, if you have an issue with this code, feel free to update it and post your own version.

There is a module for this purpose. 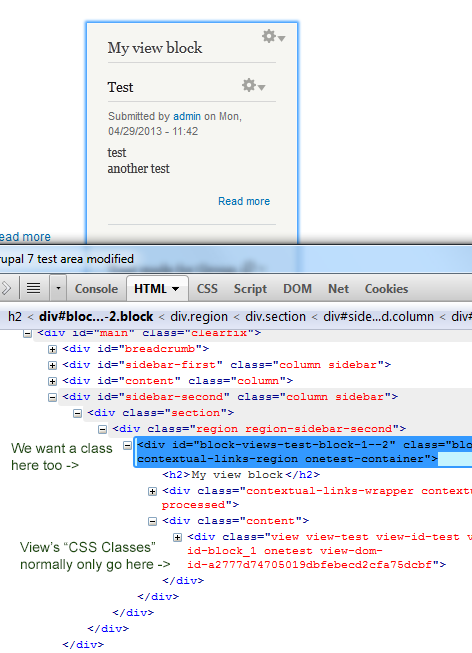 For me hook_preprocess_block() didn't work. (Maybe because I had to add the block directly from a template file via views_embed_view().)

However, hook_preprocess_views_view() with a simple check for $vars['view']->current_display did work:

The easiest way for me was to duplicate the file block.tpl.php, rename it to block--myregion.tpl.php and then add my classes inside it.

Not the answer you're looking for? Browse other questions tagged 7 views blocks theming or ask your own question.

4
Which html div classes are relevant when styling Views in Drupal 7 (for CSS)?
1
How can I add a class to a block with code (development)
2
How to theming and deploy custom blocks which created in admin UI?
0
How can I print a block (the language switcher) without the block-related classes?
1
Add views block to views header
1
How to change or influence the block id and class of a view block
1
PDO expecption error while adding class to the block with sql server
1
Cannot add CSS class to views field