I've used the migrate module in the past, it's great to import large amounts of content but it's pretty complex. This time I'm trying Feeds and Feeds_SQL to import from a mysql tables. It imports fine when I kick it off with the import UI. However it will give an Ajax error after importing a few hundred records.

I try to import using cron. That's where it gets confusing to me:

I select "periodic import" -> "as often as possible", uncheck "import on submission" and check "process in the background". 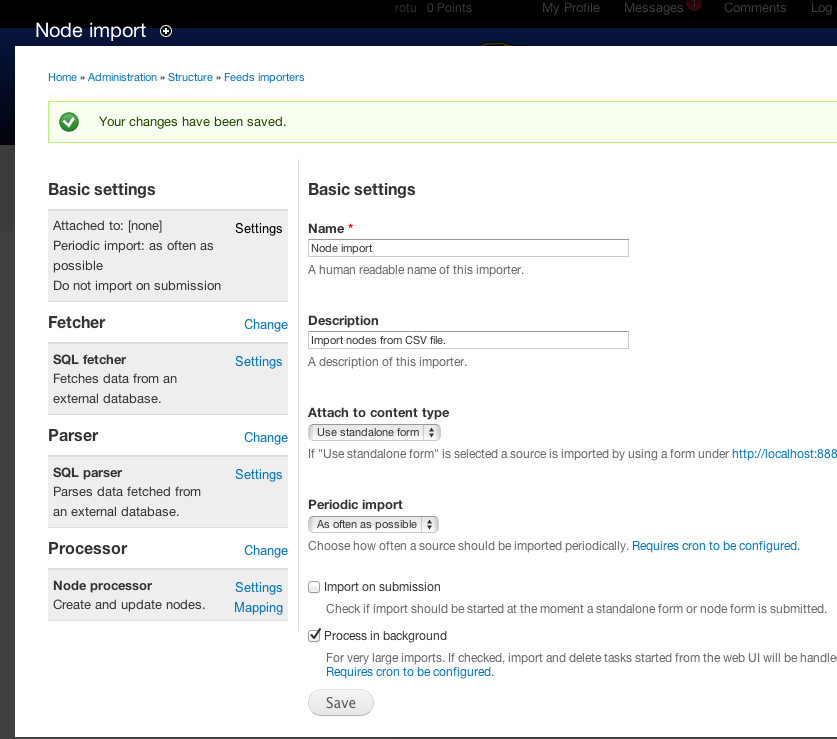 I then start the import using the UI, it imports some nodes and then stops.

Do I have the correct settings? How are the "periodic import" setting and the "feeds cron" and "job scheduler cron" related?

Is there a setting somewhere that controls how many nodes are processed each time?

Are you running the actual site cron? If not, run it.

As for the Ajax errors when running a manual import, are you sure that it isn't continuing to import despite these? My large imports will time out the browser connection when I manually import in feeds, but they will actually still continue to process.

Also, could you try changing your setting from "As often as possible" to "Every 30 minutes", to ensure the crons aren't running over each other?

Not the answer you're looking for? Browse other questions tagged 7 feeds or ask your own question.

2
How to make scheduled Feeds importers run consecutively?
1
Feed Import (Twitter) via Cron
0
why feed importer cron fails?
0
How do I periodically import from a source?
0
How to prevent that import with Feeds and Elysia cron gets stuck
0
Elysia cron and feeds being stuck - how to resume the imports?
0
Feeds Importer and cron not running