How can I programmatically delete a user?

I'm new to Drupal development and am way over my head on this one. My company runs a subscription-based site offering market research to corporations. A company pays for a subscription and is granted a certain number of users. The person designated as primary user has the ability to add the remaining users themselves. We now need to add a function to allow them to delete a user who is no longer with their company. In doing so, we need the following to happen:

The previous developer created a custom module for account management that allows adding users under several different circumstances. For example the user is completely new to the company adding it, which means they need to be added to our other unconnected systems as well, as opposed to providing a Drupal account to a user who is already in our other systems.
Currently a lot of stuff is being done with JavaScript using Drupal.parseJson to process the request based on the segments of the URL clicked. This was done for the sole reason of being able to update the page with the user list without a complete refresh. I personally don't care if this new function works that way, or if it needs to hit the server and refresh the page. I just need to find a way to do everything in the above list with a single click.

I've looked at the API and found user_delete, but it requires two params - $edit and $uid. The uid is no problem, but all I can find about $edit is that it's "an array of submitted form values." We're not using a form, though; our user lists are static text, and the actions all occur onclick of an href (at this point); so there's nothing being submitted. Is there any way I can fake the values of $edit? Or is there another way to do this? I'm reading about hook_user() and thinking that I'd call user_delete() somewhere to do the actual delete, and then my hook_user() implementation would handle the rest with the $op = delete param. But before I worry about how to get the other stuff happening, I need some guidance about how to call user_delete().

This is not that hard, for D6 it would look like this:

As for assigning the nodes created with the user account being deleted, user_delete() invokes all the implementations of hook_user() passing "delete" as value for $op. The Node module implements the hook using the following code:

As you see, the function already updates the nodes authored by the user account being deleted, and any node revisions where associated with that user account.

The first parameter required from user_delete() is normally not used from the implementations of hook_user(), when the $op parameter is set to "delete." In most of the cases, the modules just use $account->uid to identify the user data they wrote in their own database tables. Even supposing the modules saved the data using another value to identify the user account, it is a value contained in the user object.

As per writing your own queries to delete the user account, I would not suggest doing it, as there could be modules that need to be informed when a user account is delete, usually to delete the data the module associated to that account. Rewriting code when there is already a function for this specific purpose could mean also to update the code when passing to a new Drupal version. The code would not be as generic as the code already used by Drupal. 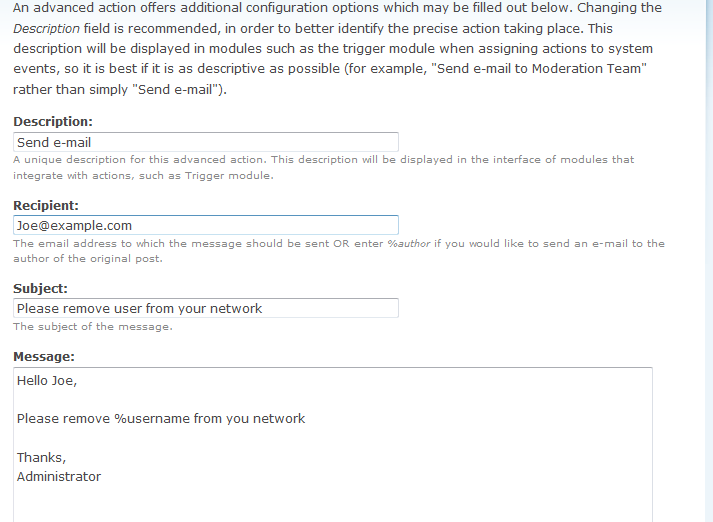 And your done! By default, when you delete a user, all of their post turns to anonymous.

You now have a choice of where you want to delete users now.

Everyone of these ways will automatically sent an email out for every deleted user. I believe this way is more flexible as you can change the email body and recipient without editing any code.

Not the answer you're looking for? Browse other questions tagged 6 hooks users or ask your own question.

2
How do I allow users to determine which other users can edit their content?
1
How can I prevent certain roles from editing other roles?
1
Give a specific user role the ability to edit, delete users other specific role
0
Delete duplicate user
1
Is there an existing module to bulk delete user content but not user?
2
User with uid=0 in database
2
Delete user and change Content Author
3
delete profile2 profile from a user
1
Giving users control of who sees their information?