How to convert a webform into an ordered list?

I've tried to preprocess a webform in order to convert the form items into an ordered list. My webform is composed of questions, and I want each question to be a enumerated list element. 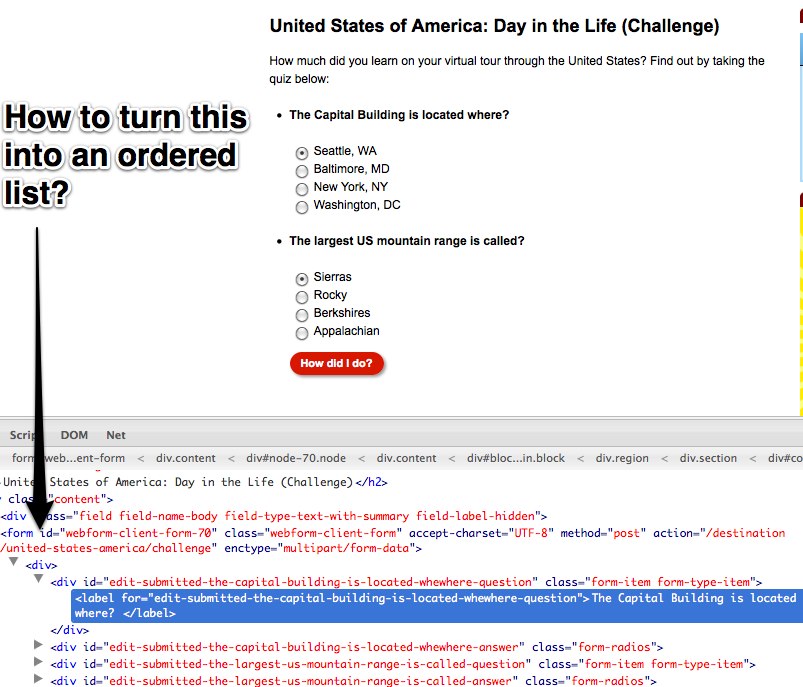 The problem is that I cannot find where to convert the <div> following the <form> into an <ol>, and the next nested <div> into an <li>. After navigating webform's source code I could not find a function that says "give me all the webform elements", for example. It all seems to work in the following order:

When I use the node preprocessor to alter the components (and attempt to insert a #type = item_list somewhere), it doesn't work. And when using one of the webform theming functions, the data structure comes in a way that is hard to modify. Example:

That variable that I tried to modify was the $variables['elements']['webform']['#form']['submitted'] in a hook_preprocess_node.

Or try with jquery/css to alter the whole structure

If you just want it to look like a list, you can use css to style it.

Not the answer you're looking for? Browse other questions tagged 7 webforms or ask your own question.

4
Load an AJAX submission enabled webform using another AJAX call
3
How to theme webform elements (radio buttons etc.)?
4
How to set the default values of "Included Export Components" for a Drupal Webform
2
Webform: how to wrap each form field with a div?
0
styling webform into 2 columns
0
Webform Module and Elements Module
1
Add CSS class to <form> element using webform and template file
2
Webform Custom-Field Module and validation
1
Add elements to webform dynamically via hook_form_alter
1
Use Webform as Module Config Page?