How to get the nid of nodes created by user (on the event of logout)?

I have a content type 'XYZ' for which the user has created nodes. Is there any way I can use to get the node ID of all the nodes created or deleted by user at the time of logout?

I am using hook_user_logout(), but I am not able to get the node IDs for the node created by the user.

hook_user_logout() is probably called only when the user uses user/logout to log out. If users don't log out all the times after they used the site, that hook is probably not going to be invoked. (For example, I have never logged out from Drupal.org, and I log in back once my session expires for the browser I am using.)
Furthermore, once a node is deleted, there is no track of it in the database, and since hook_user_logout() is going to be eventually invoked when it is too late, it is not going to find any information about the nodes deleted by the user.

I would rather use hook_node_insert() and hook_node_delete() to collect the data that will be used from another hook. For example, the following code would work.

If that is helpful information, instead of TRUE you can use REQUEST_TIME; in that way, you would log when the user created or deleted a node.

Eventually, you can use a database table instead of a session variable, but in that case you should clean it after the user logged out, if you want to reset the information you collected once the user logs out. With the code I shown, you would lose the information when the session expires for the user, so it is probably preferable for you to store the information in the database. 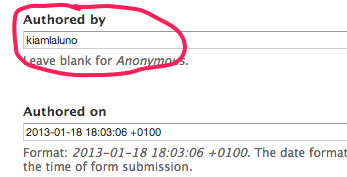 But I think it would be more efficient to use db_select in this case since no fields are manipulated.

Give it a try and let me know the results.

Not the answer you're looking for? Browse other questions tagged 7 nodes or ask your own question.

1
How to print how many nodes of a specific type a user has created?
4
How to select nodes of a certain type, created by a certain user and which have reference field to a node equal a certain nid?
4
Create a view to display the list of content created by user
0
how to get a list of all nodes that haven been created and are not in use on the system
0
How to create a list of nodes that the anonymous user has created and limit it by the current session (SID)?
1
Using Views: how to display all node edits made by user X while excluding the "first time created" nodes (original node revision)
1
Delete all nodes of a user using flags and rules
3
Rules: get content created by user account being cancelled?