Email users on node creation based on taxonomy reference

I have 2 taxonomy vocabularies (town and topic) which are referenced on both a user and a node. When a node is created, I need to email all users who are referencing any of the terms referenced on the node EXCEPT when the node has been directly assigned to a user (using a User Reference field).

The Subscriptions module works great for notifying users of all new nodes with a particular term, but I cannot find a way to exclude nodes based on other fields (in my case, the User Reference).

I can use Rules to send an email when a new node is created without the User Reference, but I don't know how to define the recipients as "all users with a referenced term which is also referenced on the new node". VBO may be the answer, but I'm lost on how to generate the View from Rules.

Actually, you can pull up all users (or any entity) based on a field value by using the 'Fetch entity by property' action.

Since users (and nodes, and comments, etc) are all entities, you can use this action to pull up a list of users with a certain value in a field.

In your rule, that gets fired upon the update of a node, simply

THEN, add a loop to your action set after this fetch, to go through each of the found entities. In this loop, we'll check for your second field and exclude the necessary ones. From what I understand, you'll want to exclude the ones whose uid matches the user reference field on the edited node.

By now your rule's action set should look like this: You're fetching users by your taxonomy property, then you'll looping through all the found entries (make sure it's pulling as many as you want, because it limits to 10 by default, by the way).

Now, add a component in your rules. Components are used when you need an entirely new rule to execute in your action area. Now that we're looping through users, we need an entirely new rule to call (IF the user doesn't have field x, THEN do y). However, when we're in the action area, we can't call conditions. So that's why we'll create a component that's a rule within itself, and call it from here. 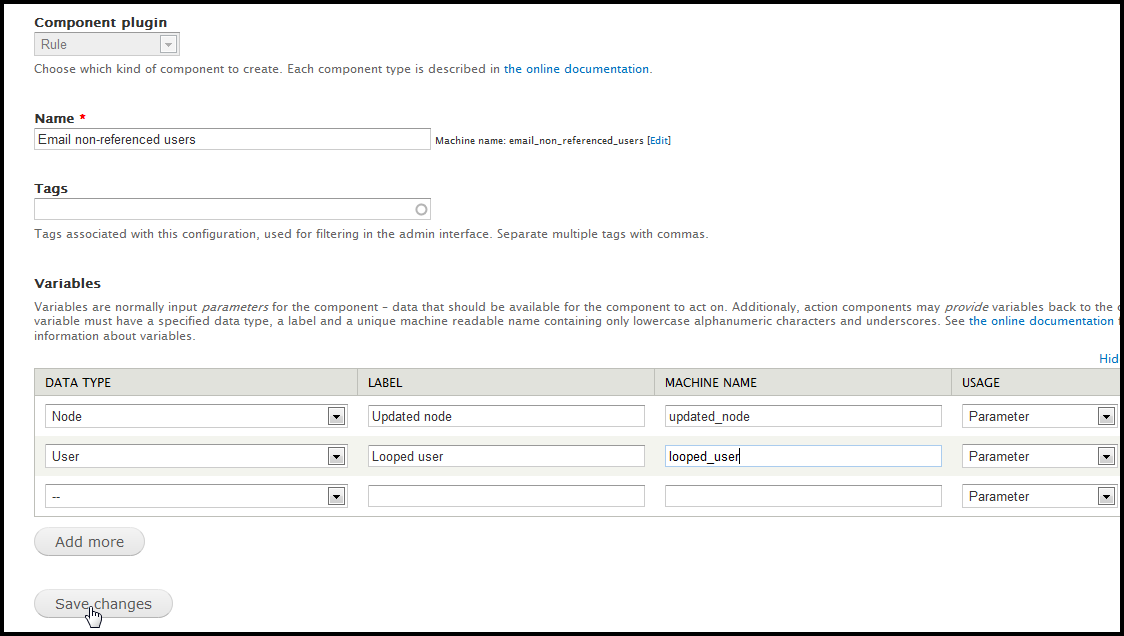 - As an action in the component, have the system send out the email you want

Voila! Almost done. This component now narrows down our looped users (with the correct terms) to those who aren't referenced and emails them. The one thing we have left to do is to CALL this component in our user loop.

Go back to your original rule, and click 'Add action' to your loop (not below it, but on it)

In your list of actions, at the very, very bottom, you will see the names of components you have created. Your new component should be there. Just select it, and pass it the updated node and the 'fetched_entity' (which is your currently looped users) as the two parameters.

This action should provide a list of email addresses. You can then loop over this list in your rule, sending a message to each one.

Not the answer you're looking for? Browse other questions tagged taxonomy-terms rules entities notifications or ask your own question.

1
Allowing users to 'follow' taxonomy terms. Then creating a view which displays a list of nodes which are assigned the 'followed terms'
0
Ongoing email alerts for content “assigned” to users via Entity Reference
0
Content subscriptions/notifications from multiple terms?
0
Sending email notification based on flagged node being linked via entity reference
0
Sending a message to users of a flagged node when it is referenced
2
Emailing a bunch of users selected from a user reference field
1
Weform: Send email to the email field in the node reference field using rules