Creating an editable table which can be updated

I have a site with about 150 users. I am going to implement a system whereby things that they do in the real world (it's a fitness company), such as attending sessions, introducing new customers etc will earn them points.

I would like to create a table with 3 columns:

The idea being that my client (editor role) could log in and amend the points that each user has and then click update to modify each row. I guess the table would be equally useful if there were just a single 'update' button at the bottom of the table to update all entries at once.

I don't know how I might go about making a table such as this 'editable', but would really appreciate some pointers as to how you might accomplish this. I would stress that I'm okay with using contributed modules, but quite poor with creating modules and PHP in general!

For your requirement Slickgrid is the best option for you and for that you need to use views module. 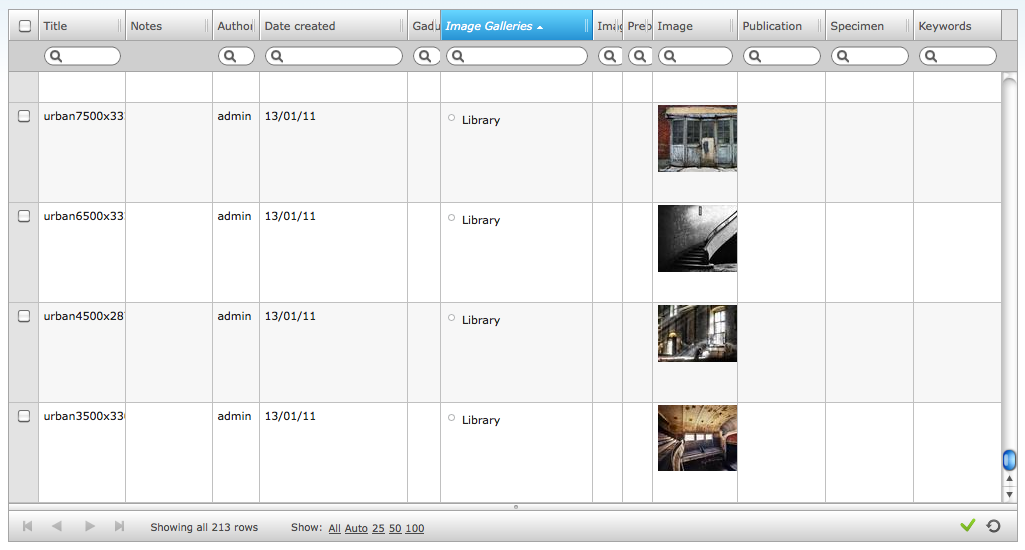 At the front end, users can show/hide, resize, reorder columns & resize the height of the grid. These settings will be stored per user and used next time the grid is shown. Saving the view (via the usual views UI) will reset these settings.

For every field defined in the view, you can set its column width, whether it's sortable, and formatters (how the cell data is displayed), an editor, a validator and filters (for filtering the column data).

This modules comes with the following plugins ready to use:

Features of the grid:

or as Pontus Nilsson said use this Editable Views module.

Just in case someone else will be searching for solution.

Editable Views module (https://www.drupal.org/project/editableviews) - works good, has only one Save button for whole table (not a row). Cannot be used with non-FieldAPI-based fields (e.g. no Views Bulk Operations and no Weights). Should be good enough for your task.

Editablefields module (https://www.drupal.org/project/editablefields) - works not so good - it saves every field right after it's editing with AJAX. The fast editing of multiple fields may result to data lost.

Unfortunately there's no ready solution to save data per table row.

You need the WYSIWYG module. Once you have installed the module, you'll need to install an editor, such as CKEditor or IMCE.

41
I need to bring a site to version control, and set up the continuous Integration environment
20
Create a repeatable Drupal install?
0
Timetable for event.
3
Creating table view with user profile2
0
How to create a tick list which one role can alter for 'lesser' roles to see?
0
Creating a sortable table in the backend?
0
Which table should I query?
0
Custom module search ranking not working + ranking admin settings not showing properly
0
Editable field in view to display editable form only
1
How do I see *which user* last updated a node?