When you paste text into ckeditor it creates line breaks in the display which don't appear in the actual text. 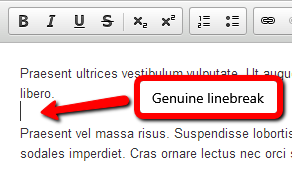 If you're experiencing weird behavior on the editing side of CKEditor it's probably because of the CSS file being loaded by CKEditor.

CKEditor implements this in a way where it doesn't show up in my firebug.

I can see the margins and padding when I hover on an element however nothing is shown when it lists the styles effecting the element. This causes the problem above.

How to fix it:

Changing the CSS file works, go to the CKEditor configuration page and select the CSS drop down menu.

Change CKEditor default to Define CSS and enter your own path for the CSS file.

What I did however was edit the CKEditor default css file. It's located in ../modules/ckeditor/ckeditor/contents.css

I was getting a margin of 20px appearing on the top and bottom of all my elements. There was nothing in contents.css about it, I don't really know where it's coming from.

But I added the following snippet which fixed it.

Not the answer you're looking for? Browse other questions tagged 7 wysiwyg or ask your own question.

0
How can I stop ckeditor from adding <p>&nbsp;</p> in front of pasted word content?
4
What is causing formatting to break?
1
Can someone explain how Text Formats work with CKEditor profiles? Very confused
1
ckeditor showing blank text area
2
How to expand/collapse text in WYSIWYG w/CKEditor
1
How to add default text to CKEditor?
1
Text pasted in CKEditor not being clean in Drupal 8