I have two separate fully developed Drupal 7 sites, which I now want to make as Multi-site. 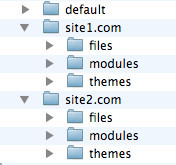 I did it like in the above pic, and it worked, except all the images on both sites are broken.

Upon inspecting element, the paths are still trying to read from /sites/default/files folder instead of /sites/site1.com/files and /sites/site2.com/files respectively.

How can I fix the paths so it reads from /sites/site1.com/files and /sites/site2.com/files?

You may be aware of this. Change file path for individual sites at Configuration/Media/File system. By default it is set to sites/default/files. So your both sites are addressing same path.

So just change the path there accordingly for both sites.

Not the answer you're looking for? Browse other questions tagged 7 multi-sites or ask your own question.

1
Moving a site, links/admin do not work
1
Programmatically change view path without views_alter
0
Multisite Installation (Attempt) Goes To My Main Site
4
manage multiple sites with a single login
0
From single site to multi site of an existing site broke all pages images
4
Routing to production and testing Drupal installations on shared hosting account
0
public files config in settings.php creates .htaccess file
0
How do I specify a parent domain in a multi-site install?
5
Are shared user tables still supported and working?
0
How do I add a site to a multi-site