If two modules implementing two separate hooks ended up with functions with the same name, could that cause a conflict or problem?

Does the scoping prevent that from causing a problem, even though the functions have the same names?

What happens if two modules declare the same hooks, even though they follow the naming scheme and the hook names contain the module names?

Hooks are plain PHP functions that follow a specific name schema. As such, the same function name cannot be used from two modules. Furthermore, Drupal is not able to understand if c_a_b() is the implementation of hook_a_b() done from c.module, or the implementation of hook_b() done from c_a.module. To answer the question, yes, there would be conflicts and (in the case both the modules are installed) PHP errors.

As for two modules invoking the same hook for different purposes and/or with different parameters, that is going to cause conflicts and errors.
The code invoking hooks calls a function basing on its name (<module>_<hook name>) directly passing the arguments to the function. If the arguments don't match the function parameters, PHP will raise an error; if the arguments match the function parameters, there will be other errors, as a hook supposes to be invoked in a specific moment, as described in the hook documentation. Imagine what would happen if a module would invoke hook_user_delete() after a user deleted a node; the modules implementing it would delete the data associated to that account from their database tables, since hook_user_delete() is documented to be invoked before a user account is deleted, not any data associated to the deleted node.

In both the cases, the only solution is naming hooks and modules in a way to avoid conflicts.

As per https://www.drupal.org/project/hook, that URL returns a 403 error because there is an unpublished project. (I can visit the project page because I am a webmaster on Drupal.org.) 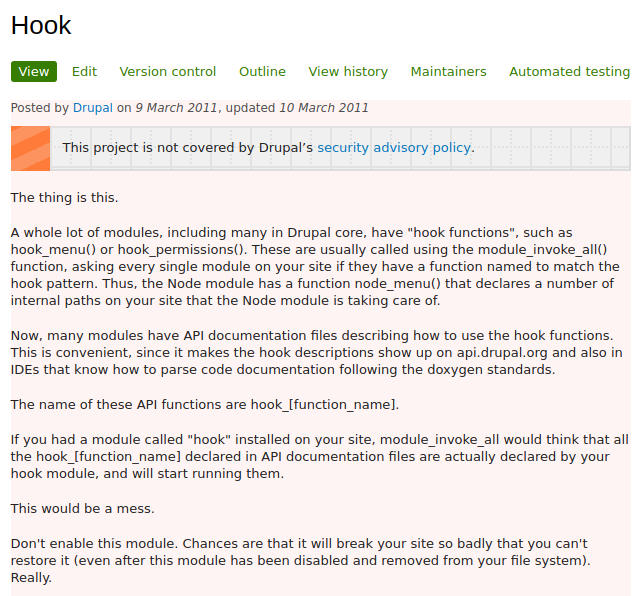 The project has been created to avoid somebody would name a project Hook.

Yes, there is a definite potential for conflicts in the style you mentioned, but I doubt you’ll see it happen that often in the real world.

I’m not really sure what you mean by the 2nd example. Modules don’t “declare” hooks as such, not in any programmatically significant way at least, they just invoke them (and hopefully document them in an include api file).

There’s the hook_hook_info concept, but that’s just for allowing hooks to be implemented in an automatically included sub-file of a module.

Not the answer you're looking for? Browse other questions tagged hooks or ask your own question.

0
hook_node_insert() and drupal_goto conflicts with each other?
1
What hook should I use to define a class?
0
How to debug hook_form_BASE_FORM_ID_alter not working?
0
Is hook_file_download the right hook for taking action when a private file is downloaded?
1
Drupal 8 Development - How to Loop Through Field Formatter Elements
1
“hook” name in module doesn't seem to work, Drupal ignores it
0
How to override other module function/hook from my custom module?