With the 'field collections' module at the form level, you can create a fieldset (or 'field group') that will accept multiple sets of values. 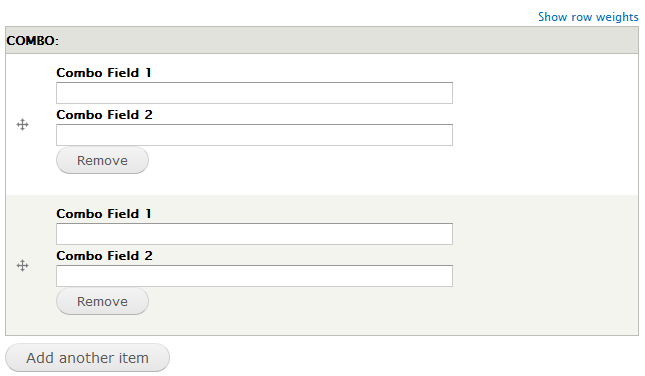 UPDATE: Just to be clear I want to create the form, not the entity itself (at least not yet). I want to use the Form API to accomplish this to make my own $form – just the form.

To attach or create field-collection item for node having node id 1.

Unfortunately, there's no straightforward approach in Drupal for doing this. You'll have to get a little creative with validation callbacks in the form API and using AJAX (optionally).

I've just created an example of how to do this on my GitHub (found here).

Drupal has an example already of how to alter forms by adding and removing fieldsets, but I thought it wasn't featured enough. I needed the ability to remove specific items, which wasn't included in the example.

Edit: Unfortunately, I didn't have the time to divulge into creating an example with drag/drop re-ordering, but there are a couple examples of how to do drag/drop tables in a couple of the Drupal core modules (Text Formats, for example). I imagine it can't be too difficult to get these two concepts working with each other.

I would suggest you to use field API to create your field item with multiple fields. Then you can add this item to your module by using form API. To see example just check core field items from

They are very similar to Form API.

You can also create field item from console:

Not the answer you're looking for? Browse other questions tagged forms or ask your own question.

9
How to implement “Add another item” for custom forms?

1
How to place multiple form elements from a loop
3
Form field with support for multiple values
5
How to write custom Form API elements for Drupal 7?
2
Form API Ajax - how to disable also form elements that will be changed, not only triggering element?
1
Allowing unlimited values for a field in programmatically defined form
0
Elements not showing in $form object
0
How to let users remove a specific field or fieldset on a custom form using the form api?