I have successfully installed but when I try to access Admin menu is giving me "Not Found" pages, though on a simplytest.me sandbox it working ok.

What am I doing wrong? 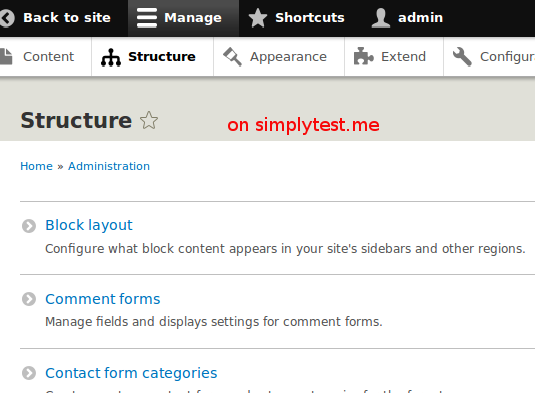 Thanks to @tenken for giving me a hint this was related to "clean urls" issue.

I got this working with the following steps:

This reference was helpful https://drupal.org/getting-started/clean-urls

I'm not sure the paged you linked is actually a -dev release from like 2013.

A page that lists the recent releases can be found here: https://drupal.org/node/3060/release

I recommend installing the:

Keep in mind that Drupal8 prior to I believe any Beta release is not officially supported by any upgrade path (to my knowledge). If you're a programmer and not a casual site administrator or user; code you write may be affected/break as Drupal8 matures to a release candidate.

Somebody please correct me if I got the Supported version wrong (even for just developers from an API standpoint; I know like the new Migrate API is still unstable).

After commentary, it turns out ModRewrite needed to be enabled on Apache for these paths to work without a querystring parameter.

I was having the problem where I would go to my-site.com/admin/what-ever-page, I would get an error.

I made sure that the AllowOverride All was set.

Also made sure that the rewrite module was installed and enabled.

Still had the issue.

What I found was that cURL had not been installed. Once that was in place and the server was restarted, the /admin/ pages started working.

Not the answer you're looking for? Browse other questions tagged 8 or ask your own question.

1
JSONP requests not working in REST server
3
“drush sql-sync” failing with Illegal string offset 'site' backend.inc:1030
3
After D8-rc1 install, homepage work but all other links gives a “page not found”
0
Custom block from module
0
The “tag” plugin does not exist
2
View contextual filter not working inside Panels
0
Access denied when trying to import single configuration item