Other (related) nodes with the same taxonomy block grouping problem

Quick view: I want to create a views block that lists all other nodes that have the same taxonomy term(s) and I want to group the related nodes by term.

I have trouble while doing this:

The content type has some taxonomy terms fields and one of them is my_taxonomy_field. I can enter multiple values to this field.

What I basically want is to show all other nodes tagged with the term(s) on this node and group them by terms. I could do this by contextual filters (content: has taxonomy term ID + ) as explained here or here.

This is the related nodes block based on the taxonomy term field:

I want to group them by terms as that (note that current node (node 1) excluded):

I tried to this with that way: views -> style -> settings (grouping field) and I selected the taxonomy term field. It does what I want, not what I want actually, more than what I want because it creates a views block as that:

This views doesn't add any (irrelevant) nodes to the list, the nodes are the same with the un-grouped one but because node 2 and node 8 are tagged with other terms, other terms listed here.

(Note: I'm working on both two ways mentioned above, these are the screenshots of them): 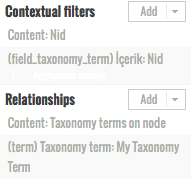 I've used tags as the term field, so adjust for that.

Create the block view as follows:

One possible solution would be to pass in taxonomy term ids from node 1, before you even start building the view.

This might involve creating a custom block (preferably by making very simple block module). The block would simply node_load(1), get the taxonomy terms from the node object.

The block could now embed the view in the block content using views_embed_view, passing the term ids into the view as multiple arguments (eg 7+6+46), and possibly the node id (to exclude). Now the view only needs to list nodes associated with these term ids, excluding the nid, and grouping by term. You could try excluding the nid using 'id from url', but I am not sure whether this works with views_embed_views, and if you do, watch out for block caching.

Given that node and taxonomy tables should be relatively stable (being in core) you might actually find this relatively easy to do with a simple db query in your block, though then you lose the extended configurability of views.

There may well be a way of doing this all within views, but I can't think of it presently, as the logic suggests a subquery (views relationships?).

After following the steps you need to Grouping your Fields using Taxonomy Term. You can group the items in view's Style Settings. 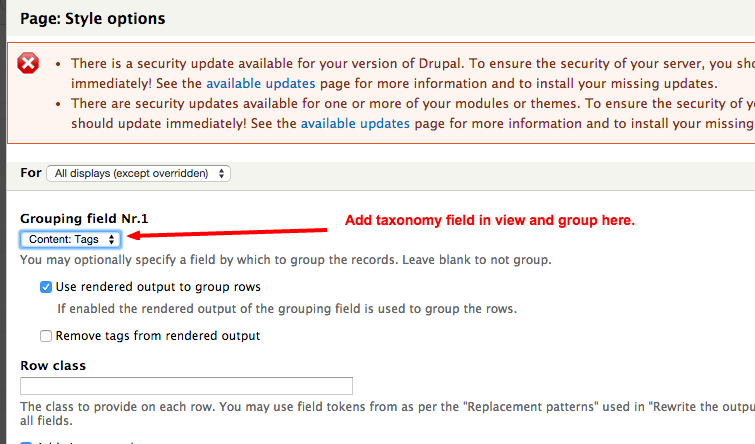