How to hide the block title?

We have a block on some pages which we like it without title, but when using < none > or leave it blank, it just showing the page title on the block title !

So how can we hide the block title ?

@Rishi answer is perfect for hiding the block-title and it should work.

Let me give you an example. I created a page where I show a simple block with its body (four lines). The page has just its title.

In the following screenshot, I didn't hide the block title, so both the page and block title appear. 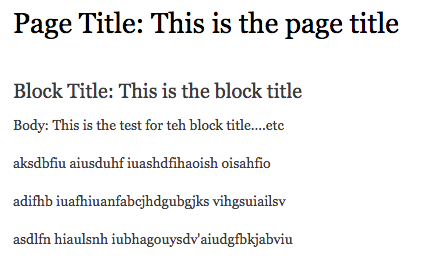 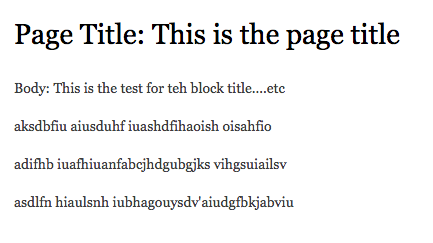 First you need to understand, how pages and blocks work. They are two completly different things.

Your question should be how to hide both the page and the block title.

The following screenshot shows the page after hiding block and page title.

See the differences between the first, second, and fifth screenshot.

In the Block title field, use <none> to display no title. Go to admin/structure/block/manage/system/main/configure: You will find the following description.

Override the default title for the block. Use <none> to display no title, or leave blank to use the default block title.

Removing the block title is easy, using CSS styles. You can add them with the CSS Editor module.

That will remove all the block titles. So if you want your block to have a custom title, you have to put it in the block, instead of using the block title, or block description when you create your blocks.

5
Hiding block title when customizing
1
How do I style a block title for a single menu in a fusion theme?
0
How can I create a Drupal “Page” (not a block) without any theme?
3
How to hide title of any content type without using a module?
1
block view is not displaying
0
Drupal 8 Hide Title If Front Page
1
Hide page title if the image field has a value
1
How can I display the block title when rendering a block using Twig Tweak?